Rossoneri Blog – AC Milan News
Home The Match Paletta and J. Mauri could reportedly start against Rijeka on Thursday as...

Vincenzo Montella will continue rotating the squad against HNK Rijeka; Gabriel Paletta and Jose Mauri could get a start.

Milan will look to bounce back from the 2-0 defeat to Sampdoria when they face Croatia’s HNK Rijeka at Stadio San Siro on Thursday night at 21:05 CET (you can find Europa League predictions at KickOff).

With Roma coming to the Meazza on Sunday, coach Vincenzo Montella is expected to give a rest to some players. According to Sky Italia, it’s possible that Bonucci, Lucas Biglia and Nikola Kalinić – among others – will start from the bench.

Sky’s Manuele Baiocchini suggests that Gabriel Paletta and Jose Mauri are both in contention for a starting role on Thursday. Montella already suggested that Paletta can replace Bonucci in the middle of a three-man defense so the Argentine could be slotted there alongside Musacchio and Romagnoli.

It’d be very interesting to see Paletta back again starting as he was on the verge of leaving in the summer and not too long ago he trained with Gennaro Gattuso’s Primavera and even took part in the 3-0 Primavera defeat to Inter on September 16th. Paletta was the starting center back last season but was criticized by the media and the fans, mostly for the number of red cards he picked up (5).

Jose Mauri meanwhile could get first minutes since his disappointing performance against Shkëndija a month ago and if he plays then it could be instead of Franck Kessié, with Manuel Locatelli alongside him. As of today, Patrick Cutrone and André Silva are expected to lead the attack.

Things will of course be clearer regarding the starting XI as we approach the match but the intention seems to rest some of the players who’ve played a lot recently, as the Roma game is more important. 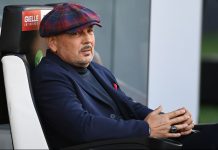 Yeah rest them, because they’ve been working so hard “:)” Interesting, I hope Mauri will do well instead of Kessie so there can be some contention for that spot. Torreira harassed our midfield, I hope that Mauri can be like him, or perhaps like Allan as he is more similar to them than he is Verratti so that comparison should stop. Paletta can do well instead of Bonucci, and I hope he will perform well so Bonucci will wake up, even though Montella will never consider actuallly benching Bonucci instead of Paletta – who got too much criticism last year,… Read more »

Indeed! I’m very excited about this lineup – unless it somehow contains Borini.
Will very interesting to see how they perform.
I hope Mauri will seize his chance.
And Loca should pout in a great performance to stake his claim on starting xi.
Let’s hope for the best.

Borini will be playing…. Fabio Borini will start as a right wingback tomorrow against Rijeka. [GdS] Meytar tweeted that.

If by resting key players means sending them to ritiro camp at nearby military facility then im all for it.
Paletta deserves this chance though. He’s been very professional and like i said, this is exactly kind of games paletta (and mauri) should play in.
Regarding mauri, this guy reminds me of davids; small but agressive and technical. I hope he can play well as box to box mf and compete for that position with kessie

There is something alot of people see in mauri that i dnt see, maybe am blind. This guy couldnt even make starting 11 at empoli and i have never seen a good perfomance from him in milan jersey except for copa italia final against juve. Mediocre player to the core and overrated by so many here.

Well, hopefully I will get to make a witty retort after the match 😉
But I strongly recommend you to watch his 5 appearances for us with Miha, and factor in Empoli’s policy of using Assane Dious – their own player to start as many matches as possible over a dry loan player Mauri — exactly opposite of what we did with Pasalic.

Play the fringe players and youngsters.

Suso and bona should be played to understand the role in a 5 man midfield.

Jokers like Zapata and palletta for entertainment. While Gomez gets some game time.

Mauri, Loca, zana and cutrone to gain some experience.

Borini should be played so that montella doesn’t have that overpowering urge to play him in serie a on Sunday.

this montella is so average, wat he shuld have done is wat he is doing now, he wil bench silva in serie a to play him against a mediocre team in europa,wat a useless coach, its now that he knows rotation shuld b for d europa n nt seriea..stupid man

It would be amazing to see Kessie on the field again after all those “no player can play every three days” comments, even as a substitute.

The reason why Suso and Bona are not usefull to 3-5-2 is because this formation requires quick movement of the ball and they are used to that 4-3-3 whereby they over keep the ball.

Anyway hope for a better match.

I am some what disillusioned and I pray we win the next three matches convincingly so that the enthusiasm will return. The squad rotation should be more for Europa games as we are pretty comfortable and our opponents are not as stubborn as those of seria a. Leaving out both Biglia and Kessie some how scares me as I prefer resting one of them and not both. However, the prospect of playing Locatelli and Mauri together is mouth watering even though the latter has not done much other than press hype. Well, let us keep our fingers crossed and hope… Read more »

that guy will be happy if we lose to roma since he was their player. last year we lost twice and i saw him smiling in the 2nd leg, he was about to go celebrate with totti. he is no better than inzaghi or brocchi. last year he kept changing players and formation, same shit this year, do you see any big clubs keep changing players when they have the 11 starters? no one do it unless it’s coppa or someone injured or played so many games then he will rest for 1 game. i hate when i see a… Read more »

Finally…. How long it took for him to understand kessie also need rest….
Hopefully Silva can make it clear he should start everyweek match. Mauri Will slot in Nice, and lucatelli Will prove he is always above montolivo in starting. Borini as wingback i see him doing well.

Has anyone noticed that all the games andry Silva has ever started in for milan , we have all won all compared to the other strikers we have .