The Derby della Madonnina is the most anticipated derby in the history of Italian football and arguably over the world. Tonight will be the 224th official meeting between the bitter rivals with Inter having the edge on the whole (80) and in recent meetings.

In what we hope will be a great game, there are certain issues that Milan will have to have addressed over this week to stand a chance against our bitterest rivals. As a consequence of my excitement towards tonight’s game, I have detailed what I believe are 3 important issues Milan need to have resolved to stand a chance against Inter tonight given our uninspired performances last week.

For starters, it was painfully obvious that Milan had run out of ideas during their encounter with Verona particularly in their attacking transitions in a counter-attack or when dictating possession in the half of Hellas Verona. This more often than not ultimately resulted in their resorting to unnecessary passes in front of the opposition goal. This not only slowed down counter-attacks, it led to the Verona defense reorganizing immediately after. It proved mightily detrimental to our attacks and was grossly ineffective as Milan struggled to break down a resolute defensive side for most parts of the game, with the early red card doing no favors. If Milan are to beat Inter, Marco Giampaolo and his charges would need to work on effective and quick attacking transitions with a goal in mind (pun intended) – shooting meaningfully or finding Piątek! Inter have an aging team with problems, as Slavia Prague demonstrated this week, and hitting them with efficient, meaningful and potent counter-attacks will aid in the team’s chances of victory come tonight.

Another aspect of Milan’s game that is in dire in of improvement to bolster our chances of a victory in tonight’s game revolves around one man – Piątek. It has been no secret how Piątek has struggled to find the net this season and eerily, his involvement in the Verona game, particularly in the first half and the early part of the second half left a lot to be desired. He was isolated and often not given the ball in positions he would like. This meant that the team was very tame in attack and registered few shots on goal during this period of the game with the midfielders and Suso especially neglecting their responsibility to find Piątek with through balls or decent crosses as he favorably positioned himself for the pitch-perfect delivery. Piątek’s involvement in attacking plays and one-twos in the second part of the second half culminated in the penalty that led to his goal as well as his disallowed goal. His swift movements and great positioning is a great advantage to this Milan team, particularly against this Inter defense. And if the team is to have an advantage against Inter, then it is obvious that they play to Piątek’s strengths.

In our last outing against Hellas Verona, two individuals who epitomized out lackluster performance were Biglia and Ricardo Rodríguez. More often than not, these two looked out of sorts, were caught out and lacked concentration. Biglia’s inability to control the game as a regista might have been explained by the fact that he was fresh from injury, although it was needless to bench the impressive Bennacer. Lucas a was sluggish and he could be regaining his form but to beat an Inter side who sit top of the Serie A, it is important that he returns to his best tonight. Especially if we want to successfully build attacks and ward off Sensi, Brozović and co. Giampaolo will be critical here because if Biglia was not at his best in training during the week, then he should start Bennacer in his first derby which frankly sounds like a better option when we consider form as he’ll shield the back four much better and distribute the balls well.

Given our recent track record against our bitterest rivals, it will be a glorious site to behold if our charges win for a change. It is highly imperative for the issues highlighted above to be addressed to necessitate our victory. Inter’s outing this week in the UEFA Champions League is an added advantage to the boys as this translates to our players being more “fresh” from a week’s rest. In the words of Dida, “the players know they have to do everything to win”.

A dominant left side, the exit of Piątek and the importance of Bennacer: a few thoughts from the last two weeks

The derby, Gattuso and what we might have in store in the coming months 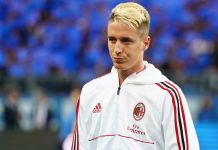 What can we expect from Conti upon his return?

Well said honestly Biglia should sit on the bench to allow Bennacer who’s younger and hungry to start,he’s faster and has more mobility than Biglia. Inter are hoping more on Sensi to do the damage but I swear we need a younger player who can match him on strength for strength and stop him. Biglia has not fully regained flexibility of what made him the master of the midfield and he should be used for matches against lower teams Honestly what will end this is an apology from the coach claiming he takes responsibility for the defeat if he feeds… Read more »

i agree with you. it’s time to give the central role to Ismael Ben Nasser.

Great article. Tell you what, the sluggishness of Biglia has already lost us the game. I can write all the vulnerabilities we have here but by the time I’m done, I will have missed the derby.

If piatek wants to improve he needs to work on his off the ball movement when he’s not inside the box. He has zero link up play. Not only that but he doesn’t even stay on the defensive line to stretch the defense. Biglia is just not good enough and at this point he is too old but more importantly waaaaaay to slow in all aspects, passing, running and decision making as well as making penetrating passes. This is killing Milan and this small time coach doesn’t understand this. Rodriguez is good but also too slow to be effective on… Read more »

A nice article with some strong talking points, but I’m not sure that benching Biglia, and playing long balls up the field for Piatek to run onto is the key to a Milan victory.

Nah fam Biglia won’t be of much use to Milan in a game like this especially coming off an injury, Piatek is a point striker so he needs the ball delivered to him, I feel Milan would do alot better playing 2 strikers more preferably Ante and Leao because they are more dynamic and have a better sense of linking up play than Piatek. But that depends on the style Milan is playing meaning a slow game or a pacy one. But what do i know

Bynz I totally get what you’re saying, and I mostly agree with your assessment. I too would prefer to see Bennacer get the start ahead of Biglia, but I don’t see it as a defining factor for the win. In my humble opinion, we need an attacking threat from the left to balance this team out, so hopefully we’ll see Leao or Rebic from the start.

No Baja bynz is right. Biglia is too slow and all he does are sideways and back passes. On the counter attack those passes mean nothing and allow the opposition to get into shape again. Bennaser gives penetrating passes that force our team forward and support the forwards faster. I to think piatek is not dynamic enough. Rebic is strong and fast and skillful. He can hold the ball up better than piatek, along with leao speed and skills. They would be hard to stop in a 352 or 4132. Football. Ow is all about speed and skill with and… Read more »

Too much criticism pointed at Piatek. How come he scored so many goals last season? Why doesn’t anybody talk about whenever Paqueta is in the field Piatek performs better? The fact is we don’t have a creative midfield. We have Turkish Kebab and Kessie with very low pass accuracy. If we play Paqueta every game and Hernandez and Bonaventure, then Piatek has better support. Bonaventure showed his class during preseason. So did Hernandez. The real problem here is Giampaolo’s stubbornness…

I’ll answer your question. He was brand new and now everyone is used to his simple play style. Piatek is very static. The only strikers that I have ever seen that can just sit in one spot are zlatan and drogba. The diff is both of those guys have unrealistic ball skills and can take on an entire defense. Piatek has no movement or link up play. I’ve been playing forward for 25 yrs and I can tell you the most important part of a target forward is to either stay on the last defender to beat the offsides trap… Read more »

I don’t seem to understand what actually wrong with Giampaolo,what is the need of demanding for new players when he can’t play them, definitely if we lost tonight game he will come up with excuses, we know Lucas is good but he just come back from injure he shouldn’t have rush him to play at once bennecer did a very good job when call upon he desever a chance to show he’s worth sitting on the bench won’t help he’s game at all this very match need players with a lot of energy in the middlfiled to match inter middlfiled… Read more »

Giampaolo’s selection so far is the weirdest to me. He was know for quick transition (which we saw during the early preseason matches), but somehow he tends to players who do not play that way. I don’t know what he is really asking from his team.

Gattuso wasn’t sack. He decided to quit because according to him he couldn’t take this team any further.

For the record Milan did not sack Gattuso.

You are completely right

Biglia should have retired 2 seasons ago.

Milan need to get rid of Biglia, Suso, Calhanoglu, Castillejo and Ricardo Rodríguez.