SERIE B’S Youngster of the Year, Marco Ezio Fossati, would like to return to Milan, and play with Simone Zaza.

Milan’s new way is focusing on youth and there is one youngster in Serie B who’s made a name to himself in the 2012/13 season and that’s Fossati, who spent the last season on loan at Ascoli and impressed despite Ascoli’s 20th place finish.

Fossati started his footballing career at Milan before moving to Inter’s youth sector. In 2010 Milan bought Fossati from Inter, along with Attila Filkor and Cristian Daminuţă, for €7 million and the midfielder says he would like to return to Milan.

Robinho: “No Santos offer, but everything is possible”
Roma lose Allegri patience – a decision will be made tonight

“My season with Ascoli? It was a season that brought me good personal results but unfortunately it ended badly with the relegation. Ascoli is a great club and the club will fight to win the Lega Pro,” Fossati, who is sometimes compared to Juve’s Andrea Pirlo, told Sky Sport Italia, as he came to receive an award for being the Best Youngster in Serie B this season.

“The best youngster in Serie B award? I was up against some players of excellent quality and I’m very pleased to receive this award and I thank the fans. I’m very pleased and it’s an award that I bring home with great joy. The transfers from Milan to Inter and then back to Milan? The first transfer happened when I was quite small. Inter’s youth sector seemed better to me then and I made that decision. I was fine at Inter and then Milan stepped forward to buy me and I made that choice.

“I hope to go back (to Milan) from the front door – that’s the objective. I have two more years on my contract and I hope to take advantage of them. The market rumours about me? I’m flattered. The market rumours are pleasing but they must be handled with tongs. I hope to return to Milan from the front door, then if I have to be transferred to other clubs who want me, I’d be pleased too. My crest can help? Just the crest is not enough.” There are reports that the 20-years-old midfielder could be part of the deal to bring Sampdoria’s Andrea Poli to Milan and he’s been linked with a number of Serie A and B clubs.

“The Serie B final between Livorno and Empoli? I see Livorno as the favourites especially because of the home factor. They deserve (to be promoted) because they’ve had a great season, but also Empoli deserve it. They are two great teams and it’ll be a great match. Simone Zaza? We have a great relationship. We’ve become great friends but even I don’t know what his future holds. Hopefully he’ll make the best choice for his career. It’d be nice to meet him at Milan in a few years.

“The Serie B youngsters who are ready for the big jump to Serie A? Simone Zaza, Saponara and Domenico Berardi. The Serie A helps you grow from all points of view,” added Fossati. Riccardo Saponara will join Milan next season from Empoli. 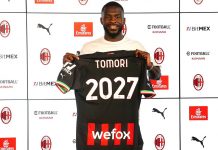 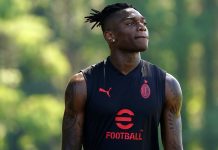 good to know,hope he learns more in Serie A possibly next season

No way to put him in any deal! He is a milan player! And should be in the squad instead of any of ( nocerino, muntari, ambrosini, flamini, traore) he really has the quality. He was wanted from barca b 2 years ago.

flamini is a very useful player, as for fossati he should be loan to a serie A team

Aubameyang may be comming back to milan! 😀

we need u back home, and I hope milan should renew his contract. Forza milan our future seems tobe so bright.

You are bred for milan so milan is your home

come on boy,we love u.

if he is the best youngster in serie B then next season he should be considered for the first team as many of the Muntaris should be leaving and we are not expected to buy more than two midfields. and seem someone posted above that Barca once were following this lad

Ask yourself is this team worthy of beating Juve, Barca or Bayern? A big fat no’s the answer.

Is Galiani obsessed with Traore? He should be included in the deal for poli. Nocerino and Emmanuelson can be used to sign better payers too.

Best youngster in seria B that says it all.The truth is that Milan would have been all over him if he was not ours.The best would be sending on loan for one more season then let him come through the front door

thats the preffered option, we could also help him develope here

it will be stupid if milan add fossati in the deal with torino for ogbonna … maybe co ownership with milan’s option to buy back but definatley not a total torino player .. its nice that milan is having one of the strongest youths in the world with el shaarawy balotelli already have a name for themselves .. pierre aumbayang wants milan return .. niang is a hardworking player but lacks finishing, we then have the new saponara and also soon to be poli, with de feo ganz petagna filkor ferreti mastour fossatti christante will i think make milan one… Read more »

Allegri stays. The saga is over. Now the renforcement.

I think he should be added into the space of traore just like cristante for ambrosini and poli for nocerrino. Would be good to see saponara, cristante, oduamadi, forsatti and petagna in pre season matches.

best youngster of seria b. Just like elsharawy was. But why was he not included in the under 21 squad if he was the best youngster.

fossati wishing you best of luck next season.forza milano

Milan should keep dis guy, he has d talent to become one of the greatest stars. Maybe loaning out for 2 season to a seria a club will be good for him. A club like genoa, atalanta and so on, dat will add to his experience in top flight football. Pls dnt include any of our young star in any transfer. Forza Milan

I hope he makes it to the senior team. It would be good to see another loan to Serie B to allow him to continue to improve.

hmmm, i hope galliani and allegri are listening to this boy. lets take him back before another club does pls

Let him be on loan for another season to gain more exprience.