Samu Castillejo’s representative has denied the possibility of the player returning to Villarreal.

Samu’s agent Manuel Garcia Quilon made it very clear a few days ago that his client’s desire to stay at Milan and that he will not consider offers to leave.

La Gazzetta dello Sport, in any case, linked Samu with a return to Villarreal today. An agent working on the interests of Castillejo together with Quilon, Rafa Zurro, spoke to Calciomercato.com to put these rumours to bed.

“How is Castillejo doing with Giampaolo? Very well, he is concentrated on this new season in Rossonero,” Zurro said earlier today. “He wants to do his best. If he likes the role of the second striker? Yes, he does what the coach asks him to do. The interest of Villarreal? Quilon has explained everything very well recently: Samu remains at Milan.

“Wouldn’t he like to return to playing at La Liga? It’s not part of our programs. As Quilon also said, Castillejo will do great things at Milan.” 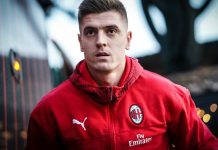 We need to sell him. He is not very opportunistic and wastes many chances. He is better off as AM rather than SS.

I’m not seeing much difference with Correa. Not a 30m difference

Castellijo is a player I definitely believe should be sold. He doesn’t fit in our new system and he’s not good enough to be a 2nd striker. Both Castellijo and laxalt should be offloaded.

There’s no need to keep them.

we need 4 strikers, who do you sub off during tough games if one of our players gets injured?

I would rather keep Andre Silva if we need a 4th striker. Once we sign Correa, we will have at least enough strikers because Borini can play as a striker which is his actual position.

Castellijo is useless as a backup striker.

Agreed, if this guy was a striker. Far too wasteful and does not have what it takes to play SS, certainly for a team like Milan.

suso must be offload from milan…

In your wet dreams !

just sell suso… milan should buy someone who really play as AM rather make some stupid experience with other players…. serie A will be tough competition and the other team make right track to get competitive, milan still makes stupid experience…

suso?? wkwkwkwk… i dont wanna gamble with player who can gave 3 trophy unconsistent for milan…so lets give me thumbs down and we will see milan at januari and mei…