Theo Hernández spoke to the fans after renewing his contract with Milan until 2026, explaining his motives.


Hernández officially signed his new Milan contract today, getting an increase from €1.5m per season to €4m plus bonuses.

And it cannot be said that it’s undeserved, as Theo has been consistently one of the most important players on the Milan squad with his goals and assists.

After putting pen to paper today at Casa Milan, Theo had a live interview on Milan’s TikTok channel:

“I’m very happy. From the first day I arrived here I’ve had a great time with the coach, the team, Maldini and everyone. For this I have renewed,” he said, as reported by Milannews.it. “Now we have to continue like this and do things well. It’s true that there were many teams that wanted me, but I only thought about Milan and about staying here. I’m here with the fans. I’m really very happy here, with my friends and teammates, my girlfriend and with the baby on the way. I’m really happy.”

What did Maldini and Massara say to you?
“We were joking a little bit, but what they wanted to say to me they already did on my way here. What they told me I’ve known from Day One.”

One of the best fullbacks in the world has decided to stay at Milan…
“I am still young, I have to grow day by day. It’s not up to me to say if I’m better than others’ that’s for other people to say. Pioli has improved me in everything, both as a person and in the game; from the first day I arrived, he told me that I have to do what I know and now I am doing it. The people, my family and my teammates help me.”

Your qualities are known to all…
“I like to attack more than defend. My idea, when I get the ball, is to go for goal. Then, if there is someone there I pass it [laughs]. Our left wing is devastating. Rafa is an incredible player, fast and technical; but he is young, he still has to grow.”

When a defender sees you come at him – what does think?
“Holy shit, I got to get out of here!”

On January 6th you wore the Milan Captain’s armband for the first time…
“The coach had told me about it but I thought it was a joke. It was true, I hope to keep it for longer.”

Did the Milan group help you sign?
“We are beautiful family. Sometimes we all go out together, we are like a family. This is why I stayed here, because I am happy with the fans and with my teammates.”

How do you experience the pre-match?
“I am calm, I don’t have anxiety in the days before a game. The day of the match I concentrate, I think about what I have to do in order to give everything.”

What has been the best day since you’ve been at Milan?
“The first day was the best. It’s not easy when you don’t play in another team, you don’t have that confidence. Here they gave me confidence and thanks to that I’ve become the player I am.”

What has been your most beautiful goal at Milan?
“Against Udinese, it was a nice volley, but all of them have been beautiful.”

What is the best moment of your day?
“It’s when I come home and see her [his pregnant girlfriend Zoe Cristofoli] with her belly, eating everything… it’s beautiful. She doesn’t tell me anything about how I need to play, she just talks to me about things outside of football. She doesn’t understand anything about football.”

Milan, in recent years, have been playing very well…
“We have been playing well for a long time. It’s a beautiful and wonderful moment. We have to continue like this. Football is fun, you need to have fun and if you don’t have fun then you can’t play. Even in training we laugh, but then when we need to do things – we do them.”

The fans of Milan love Theo Hernández!
“It’s an incredible love. I thank the fans who love me so much, I think it’s because I’m doing things well. I promise to cheer with a T on the next goal for the fans. Thank you all, the story continues with me here. Forza Milan sempre!”

another great news! Hope other players follow including Kessie and Romag. Even if they are not willing to stay, just make deal with them to extend the contract for 1 year. In summer they can go for affordable price to other clubs like 20m. So milan can still get money from them, just like what chelsea did to Giroud who was actually already out of contract last season.

What?! Maldini signed an extension on probably the best LB of the world?! He was lucky! Some wanna sign others want the be free and decide like the snakes their are. I’m convinced that Romagnoli has the will to extend, now Kessie is a different story. Players have a few years to make money, agents will tell the something like, one injury and you might be done, you need to earn as most as you can and I will make sure that you will earn money. Now, players need also to consider that they are performers, kids admire them and… Read more » 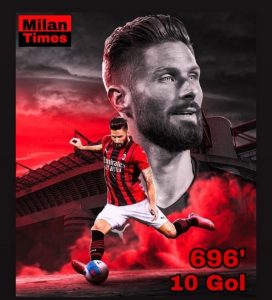 Congratulations lad you will score higher in your carrier