Rossoneri Blog – AC Milan News
Home News Interviews Pioli: “We do not feel unlucky, I have great confidence in Tătăruşanu...

Stefano Pioli spoke to the press ahead of tomorrow’s Verona match, saying ‘it is essential to not lose points against the smaller teams, like it is in direct clashes’.

After a long international break, in which Milan also lost a few players to injuries and COVID, namely Mike Maignan, Theo Hernández, Alessandro Florenzi and Junior Messias, the Rossoneri return to Serie A action and return to San Siro tomorrow for a match against Hellas Verona (20:45 CET kickoff).

Today, coach Pioli held a press conference at Milanello, where he answered the various questions of the journalists, from Mauro Suma, through Sky and Milannews.it, and even questions from Twitch:

It often happens that there are weeks in which there is little talk about the match. Did you manage to stay focused and sheltered from everything during the international break?
“The international break was a different week, as are all international breaks which we’re used to by now. We only had the full squad available yesterday for the first time. I saw the right level of attention and engagement from the players, which makes me confident we’ve prepared well for an important and difficult match. A difficult one, because Verona comes off four good consecutive results, and we expect a team that is well and we’ll have to be prepared for this.”

You never look for alibis. It has been a particular week for the many injuries. Have the national teams cancelled the performance in Bergamo? How is the mood at Milanello despite the defections in recent days?
“The team has not forgotten the last performance. The break has taken away many players, but we have it very clear in our heads what we did in Bergamo. We face a similar opponent to Atalanta from the point of view of aggressiveness and we’ll have to be prepared to provide a performance with a lot of quality and physical energy.”

How is Ibrahimović? Can we count on him?
“He is better. At the beginning of the week he started to work on the pitch individually and yesterday and today he was training with the group. Tomorrow morning’s session will be fundamental and we’ll decide what to do. Surely if he’s called up then it’d be very important news for him and for his team, but his condition is growing.”

How is Giroud doing? Is the attack back to full-strength?
“Olivier made good use of this break. He feels free from the back problem he had. He feels better and is available for tomorrow.”

How is Tătăruşanu and will he be the starter tomorrow?
“Tătăruşanu will be playing tomorrow, he’s the only presence I can guarantee for tomorrow. He is an excellent profession and a great goalkeeper. He’s always been open and willing to help everyone. He is ready to seize this opportunity.”

Milan has always had its own identity, also last year. But this year there seems to have been a step forward from the point of view of offensive dangerousness. What do you think?
“We must continue to try to be dangerous, clearly having a high percentage of conversion rate is important and many players are improving in this. In this sense, our level has grown.”

Is Calabria available for selection for tomorrow? He did you find Mirante?
“Calabria is doing well. He’s been training with us for three days now and he’ll definitely be called-up, I think he’ll also be able to take the field. Mirante meanwhile needs at least a week of training to be ready, he’s not ready to play yet, but I’m happy and grateful to the club for hos signing because we clearly needed him: he’s a serious professional, a veteran ‘keeper who is very reliable, so I’m happy with his arrival but we’ll have to give him a few days.”

How did you find the players who returned from the national team? In particular in midfield…
“Bennacer and Kessié are doing well. Between yesterday and today we played against ourselves to see everyone’s condition, but all the players got back in a good condition.”

Now Milan is back to being an ambitious club. Where do you want to get to?
“The badge of Milan has always made them a desirable club for many players. Now the results and the performances are more consistent and we want to get as high as possible. We think match by match, but each time we prepare very well to try to win every time. We are Milan, we play at home tomorrow and we’ll take a lot of energy also from our fans to win.”

In previous games, the group always reacted well to a lot of absences. What was the reaction after the Maignan and Theo Hernández KO’s? Do you feel unlucky?
“I believe back luck only exists for those who believe in it. My squad and I do not feel unlucky, we’re a solid, cohesive group and we want to insist on continuing with what we’re doing, we want to overcome every challenge, whether it’s the opponents or the injuries, and there are many other things that can happen over the course of a season. I believe we must make the most of these difficulties, use them as opportunities to prove our true worth. That is what we’ve always tried to do, that is what we intend to do doing forward; especially tomorrow.

How is Brahim Díaz doing?
“During the break I saw him very well. This morning he was a bit indisposed. Let’s see tomorrow.”

The performances against Atlético Madrid and Atalanta led to a further step forward. Is it true that the team has grown compared to last season?
“The team, thanks to the work done, has become more aware of its own means. We are also taking advantage of the growth of some individuals, who are definitely at a higher level this year. We all have more confidence during the match and this helps us to be more of a team during the game.”

What is the ingredient to beat Verona and what mistakes shouldn’t be made?
“There will be many difficulties because we face a team that is well, physically and mentally. Clearly they will run some risks and we’ll have to be good at exploiting some spaces that they’ll grant us. Against opponents who press so hard, moving well becomes very important. We’ll have to be good at being consistent throughout the game. There will be some difficulties, but we’ll never have to not lose the plot; I think it’s essential to not lose points against the smaller teams, like it is in direct clashes.”

Will Ballo-Touré play tomorrow, given the absence of Theo?
“Be content with only knowing that Tătăruşanu will play! Ballo-Touré returned from the national team in good condition. He’s time his time to adapt, against Venezia he was a bit timid, but it helped him gain confidence. He is ready to make his contribution. He has great speed and is more inclined to push forward, but he is also careful in the defensive phase. He is a player with good potential and he needs time to understand some situations that are new to him.”

Milan has not gained this many points since 2003/04. What is missing to get to the level of that team?
“To be compared to that team, the only thing missing is winning the Scudetto. That was a Milan team of the highest quality, which had already won. We are working, we have the conviction of being able to win one day. After seven Matchdays, we have already done better than last year, but it will all depend on what we do tomorrow. We have to think of tomorrow’s match as if it were the most important one of the season, I’d go as far as to say we must treat it as our final match. The game we want our fans to remember us for. We need to face each game with this attitude and mentality; giving each game everything we have. We have a lot of quality, my players have a wealth of quality: morale, technical, tactical and physical and they must do their upmost.”

How did the team react to Maignan’s absence?
“These situations are uncontrollable and we feel sorry for Mike. We have seen him very positive and we are convinced that he’ll come back stronger than before. His entry into the team has been very positive, but I have great confidence in Tătăruşanu. The team will have to be a team even with different elements. We will have to not lose balance and make the most of the characteristics of each player.”

How important is the recovery of Krunić?
“It’s very important. He is one of those players who has made a leap forward from last year. He can be a player who can play many roles, among them also that of the trequartista.”

Will tomorrow’s three points count even more considering the direct clashes of the other teams?
“They are important to continue on our path. It’s still too early to look at the opponents we have to think about ourselves and do the best we can.”

What has changed about Tudor’s Verona compared to previously?
“I get the impression Tudor is reintroducing the tactical plans of Jurić’s Verona last season. They are a very intense and aggressive team, they’re excellent at counter-attacking, with three forwards who have difficult but important characteristics: Bakar is a very physical player who is also technically gifted, Caprari is great in one-on-ones and Simeone, who I coached at Fiorentina, is great at playing in depth. Verona is a team with a lot of qualities but we must make the most of ours and do better than them.” 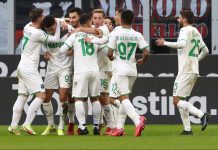 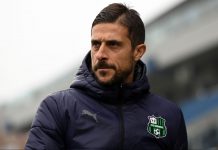 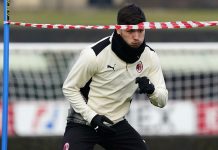