Rossoneri Blog – AC Milan News
Home News Interviews Romagnoli: “We were good at reacting, it is certainly one of the...

Alessio Romagnoli spoke briefly to the press after the 1-1 draw against Juve.

Milan got a 1-1 draw at the Allianz Stadium against Juventus last night, fighting back after finding themselves 1-0 down already after four minutes.

The Rossoneri looked exhausted from a physical standpoint, but mentally they were there for 93 minutes. Ante Rebić (76′) scored the equalizer, and Milan nearly won the match, but in the end settled for a draw against Max Allegri’s side.

“We weren’t very good at the beginning but we were good at reacting. Now let’s think about Venezia,” Diavolo Captain Romagnoli said to DAZN after the final whistle of Daniele Doveri.

On the team: “We know that we could’ve done better at Anfield, especially when we went a goal up. We had another comeback today and did well to get the game on track.”

On his playing time: “As I’ve always said, I try to give my best. The coach makes his decisions, all I can do is try to make it difficult for him to pick the starting XI.” 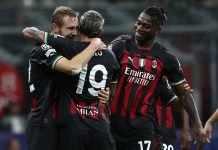 Leave with your raiola and all stuff !

we have good cover for CB and RB. the question is the left back. Theo can not play all the time. Can Balo Fode do his job?