Paolo Maldini spoke briefly about the start of the new season, hoping to see fans at the stadium.

Milan began training for the new season yesterday at Milanello, and the players – together with coach Stefano Pioli and directors Paolo Maldini, Frederic Massara and Ivan Gazidis were all at the training center for Day 1 or 2021/22.

Maldini sat down with MilanTV for a short interview ahead of the new season and had the following to say:

“The feeling is that of getting ready to start again after a very positive year, a year full of great results and several confirmations. I also believe that there’s a certain stability at the Club level and on a sporting level. And therefore the natural idea with such a young squad is to improve everyone’s performances. Having this stability is an advantage over other teams that are making changes.

“Competing in the Champions League? We already play in a very competitive tournament so it’s normal that the emotions when it comes to the Champions League are sometimes perceived to be more intense. Therefore we’ll look at evaluating certain players. Young players, among others. We’re also hoping they can play in front of a large audience because I think this greatly influences player growth, which some players haven’t had.

“The affection of the Milan fans? As we said last year, their events which had been authorized, gave us a great boost during the course of the season. We’ve seen what’s been happening at the European Championship and the difference between football with fans and without fans is incredible. Not just for the spectators who enjoy the show with others in the stadium. But especially for the players who really bring out all they have.” 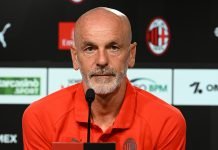 great leader takes us to success

Calabria suffered an injury to his right hamstring and should be out for 3 months, Kjær to return in...

Saelemaekers suffered a partial tear in his left knee’s MCL, he’s expected to miss the rest of Milan’s 2022...