Davide Calabria is happy with his renewal, and can’t wait to play in the Champions League.

Calabria has signed a new contract that ties him to the Diavolo until 2025, as confirmed by the club on Friday morning.

Davide, who is currently recovering after undergoing surgery but should be back soon, sat down with MilanTV for an interview after putting pen to paper:

On Milan: “This is my second skin, my second family. I grew up here, I’ve been here for 15 years, and I have had so many amazing experiences as a boy and now in the First Team. These are emotions that… that I feel deeply and will carry with me for my whole life, so I’m really happy to be able to continue this challenge together.”

On the renewal: “It’s exciting to be continuing this journey because I grew up wearing this shirt. It’s a pleasure and an honor to be a part of this team and of this family so I’m really happy and full of emotion. Absolutely it’s a revival! We’re happy with the renewal both myself and the Club. We were able to reach this agreement and I can’t wait for it to be announced. We’re very pleased with what we’ve done.

On his growth: “I’ve matured a lot, I have more responsibility within the team now. It’s a growth that every player needs to go through but that’s not easy at a club like Milan but I’m happy with what we’ve done, especially in recent months in which we got some great results.”

On the last period: “We’ve gone through a strange time, a period of pandemic that maybe brought us even closer together and we’re back playing with all of the desire to show our millions of fans worldwide just what we can do. We’re happy that we reached our goal last season but we’ll try to go again this year.”

On the Youth League: “It’s great, because we’re back in in it since the first edition, it’s definitely great for the younger guys to be able to go around Europe and face the other clubs in this competition, the UEFA Youth League, because I have some amazing memories: Ajax, Chelsea, Celtic are big teams. This experience helped us to grow a lot both as individuals and as a team. Now, coming back as a First Team player is fantastic and I can’t wait to get going.

On the fans: “I think they gave us that extra push, especially in the difficult times, especially this year towards the end of the season. It was great to see them a few times with that enthusiasm. We’d been missing it for some time and seeing some of the fans outside the ground isn’t something you get at every club. I hope to see them inside San Siro soon with the same fervor. We can’t wait and I think they can’t either!”

On what he sees in the future: “A bright future, with ambitious aims but I think we have the desire to show what we’re about on the pitch once again, starting like we started last season, but finishing even stronger.”

On the Italy national team: “Best of luck, because they’ve had a fantastic run. When I was with them, it was a really great group, so they deserve this win.” 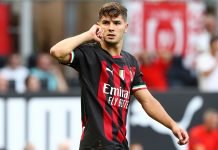 Well deserved Davide, your a proper good player and a genuine Milanista

Happy with this. We have a solid defensive line now. A Gk and the back four. I hope Kjaer won’t be a problem with his renewal

Kjaer wont, he already expressed the desire to end his career at Milan.

Solid player. I’m satisfied we kept him in the current squad as RB. Humble and hard working players are underrated these days.

Off topic
In my eyes, this new season’s home jersey is truly horrible

Yeah, looks like woman’s shirt on men because of the wide collar

id actually rather have one of the women shirts this year as i actually like their banco bpm add more than the emirates one on the male shirts 😀 the v neck isnt really in my taste though and when that is said i do not like the striping sizes on the new shirts regardless and thought last seasons shirts should be more of a blueprint for how our shirts should look.