Rossoneri Blog – AC Milan News
Home News Interviews Tonali: “The only thing we are focused on is winning the game...

After making his first start for the Rossoneri on Sunday in the 2-0 win over Crotone, Tonali is now getting ready for the important Europa League play-off game against Rio Ave on Thursday night.

Ahead of the game, the 20-year-old, who arrived from Brescia, spoke to MilanTV:

On the value he gives to football: “Football is on the pitch, 90% of football happens on the pitch so if you do well on the pitch you don’t need anything else. So, let’s say… the last 10% is something a bit extra, which some players want and they do, but it’s not something essential, that everyone enjoys so it’s best to just stay focused on the football and keep a cool head at home. On the pitch and at home, when needed, we need to do bits for the media or social things so it wasn’t the right time.”

On the match against Crotone: “The wind was an issue, it influenced the first half a lot because we couldn’t string a lot of passes together. Playing in windy conditions is always really tough. Then we started playing. As soon as you can, you should get the ball up the pitch, this is what we know as players and as teammates. We always try to get up the pitch as soon and as much as possible. This causes problems for a lot of teams.”

On getting familiar with Milan: “Let’s say that I’m not unfamiliar, I’ve always been a Milanista. When I was at Brescia, I watched Milan’s games so it’s not that I’m ‘unfamiliar’, I am and always have been a Milanista. I also came to secretly watch Milan play in recent years [smiles]. So for me that’s not the right thing to say but in any case, I’m pleased to be here.”

On Kessié: “He always gives 100% and never gets tired. After one game, he could play another. He’s always up for it. He’s definitely the kind of guy who gives you a lot, helps you and supports you. It’s easy to play with Franck, because he really helps you whenever you need a bit of cover. He’s got everything, which is really important.”

On the match with Rio Ave: “The only thing we’re focused on is winning the game this week and putting in a good performance, giving 100%. This is what we all want and we’ve known how important this game is for some time. We were focusing on Crotone, now we’re concentrating on Rio Ave with the entire squad.”

On the absence of football: “When there was no football, we saw that a normal day can be a sad day. And the simple moments when you had 20 minutes to put on a game were something really amazing. With all the safety guidelines, if you can play, you always have to play.”

On returns from injuries: “The group helps a lot with these injuries. A few players are coming back now, which is important for us because it’s hard to play all these games so close together so we need all the players to be at 100%. It’s essential for the group and we need the group to be united.”

On the international break: “Going into the break in good form is our main objective. It’s our main objective, because after Rio Ave, we have a really important league game and winning them should really be a big step forward. And coming off the break in good form for another game that we know… we’re waiting for Rio Ave and then good from Sunday to Sunday. Now, we’re looking at Thursday and then we’ll focus on Sunday’s game with calmness and serenity.” 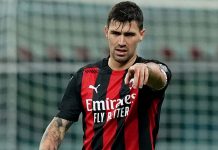 I have faith in you… help us achieve our goals