Stefano Pioli is going to make some changes to the XI, with Rebić on top, flanked by Alexis and Brahim.

After beating Bodø/Glimt 3-2 in the third round of the Europa League, the Rossoneri return to Serie A and coach Pioli will reportedly be rotating the starting XI.

As reported by Sky Italia and others, Pioli is planning to start Ismaël Bennacer and Samu Castillejo on the bench, keeping them fresh for Thursday’s match against Rio Ave in the Europa League play-offs.

In the place of the Algerian, there should be Sandro Tonali. The ex-Brescia man is going to get his first start since coming to Milan and he will play alongside Franck Kessié. Tonali will be one of the double-pivots and he’ll have a chance to show his qualities after several appearances off the bench.

Instead of Samu, Pioli is apparently planning to start Brahim Díaz. The 21-year-old winger will play on the right side of the attack, with Alexis Saelemaekers and Hakan Çalhanoğlu playing behind Ante Rebić. The Croatian, who is suspended for the game against Rio Ave, will start in the place of Zlatan Ibrahimović (in COVID quarantine), leaving Lorenzo Colombo on the bench ahead of Thursday. 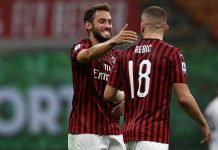 Nice… chance to see Diaz and tonali show off their talent, hopefully Diaz can convince pioli and keep samu on the bench going forward

Keep samu on the bench 4 life

I like that. Diaz is quick and highly enterprising. He is a beautiful player

Everyone is striving to be relevant and be a team player in this team…..one Paqueta is just sitting down warming the bench. .Big shame !!

Paquetà is on his way out possibly to Lyon. So he’s no longer part of Milan plans. I believe his attitude is a factor and in all honesty he hasn’t really lived up to the hype.

Paquetà needs to leave that bullshit ginga Brazilian football crap in Brazil. Paquetà is a futsal footballer. No end product in goals or assists. Just a bunch of useless tricks.

Agreed, hopefully we get Hage, Bakayoko and Rudiger until the end of the transfer season. If we could even pull of Chiesa I think we could actually dream about top 2. 2 year loan with obligation and he would sign extension with Fiorentina beforehand could do the trick.

Zion we usually agree on opinions and once again we are agreeing with paqueta. Milan need to understand the types of Brazilians we’ve had at Milan. Kaka, pato, dihno are the most recent. All of them speed while dribbling forward. They had end product. Paqueta likes to waste time backing into the defenders when a give n go is available. He slows our game down. We need to sell him ASAP and get players that fit what we need

I agree with you. He could be a very good player but he has a bad attitude. That does not help if you’re playing for milan.

Good line up but honestly wtf is Colombo not playing!!! Fucking put rebic on the left and Colombo up top. Save salemakers as a sub for the right side, leao for the left. This is not a difficult thing to do. The team picks itself here and yet Colombo who is full of confidence gets benched. ‍♂️ this is why youth players have a hard time making it in big teams. When they are playing with confidence, the coach goes and benched them the following game

I agree with u but pioli seems to have it all planned out ,seriously I won’t play castellejo ahead of saelemaekers

So who plays striker on Thursday if Colombo picks up a knock? Everyone is a coach and just talks without understanding what it means to rotate the squad when you have 3 matches in a week.

Lemme spell it out for you:

Oh please spare me with that bs. I’ve been calling for attacking players and everyone always says I’m wrong. Now look at y’all. Afraid of what happens if he gets hurt. Small teams think like that. If he were to get hurt, you replace him with roback. I’ve said we need a forward and rw and no one listens. Now ppl want to play scared.

It’s not the matter of what milan need.
NOW it’s about milan dealing with having only colombo for the europa league.
It’s not rocket science

Thanks for giving Nathan a free football lesson. He has shit brains.

Dear,
Their is something called false number 9 in soccer… Diaz can surely fill the gap if wanted

And what happens if this back fires? Then I bet y’all will be the first ppl to say Colombo should be playing. If your going to play scared and conservative, your going to get bad results. I hope it works out for both games. The best players will play all the time no matter what. Milan don’t have the luxury of not playing ppl in form. Like I said I hope I’m wrong but if I’m right, I don’t want to hear y’all say anything

what exactly are u trying to say? that rebic, last year’s topscorer, cant play as st? that colombo is better than rebic playing as st?
also, dinho lost his speed in 2007/08 season so no, he didnt dribble forward fast in his last season with barca, let alone with milan. skillful, absolutely. fast, no way

I do really hope that tonali and diaz get the start.
And maybe get kalulu some minutes too.
What’s better than giving chances for new players to gel and show what they have against a weaker opponent

And who says crotone are weaker teams ,don’t under rate any club in football cos they may pull of surprises ,who wud have gambled that Verona will beat Roma 3 nill ,this are some of the matches I fear the most …but I see milan winning .crotone 1-2 milan

Not underestimating any club, but on the paper crotone is below milan.
And verona won against roma by AAW because roma fielded unregistered player

WE NOW RETURN TO LIKE MILAN10 SAID PROGRAM “Milan10 9 days ago regarding double pivot, like it or not, bennassie combo should always be starters because they complement each other so well. if tonali is going to play, he should replace ben, with kessie as dm. … regarding winger, brahim should be main rw from now on, at least until his loan deal expires” “Milan10 1 day ago Reply to MilanEstonia “We need a fully fit striker for Sunday so he took off Colombo” anyone who understands football -which pioli surely does- knows rebic the topscorer of last season will… Read more »

“bennassie combo should always be starters because they complement each other so well.” u should sue ur teachers mate. he/she didnt teach u reading comprehension. that is of course, if u actually went to school at all

© Copyright 2009-2019 RossoneriBlog, All Rights Reserved
wpDiscuz
27
0
Would love your thoughts, please comment.x
()
x
| Reply
We use cookies to ensure that we give you the best experience on our website. If you continue to use this site we will assume that you are happy with it.Ok