A WONDERFUL atmosphere at the Estadi de Mestalla set the stage for an interesting encounter between Valencia and Milan for the Trofeo Naranja. The first half was entertaining with both sides playing nicely but also making a lot of mistakes which also led to goals. In the 18′ minute, Cristian Zapata made a blunder, passing the ball to Paco Alcácer by mistake around the half-pitch line; the Spanish attacker took the shot from distance and found Diego Lopez off his line, scoring a sensational long-range goal. In the 28′ minute, Keisuke Honda showed he’s also capable of scoring wonderful goals as he sent the ball to the back of the net from a free kick, making it 1-1. Milan were a mess defensively throughout the game and in the 38′ minute Rodrigo was very smart to beat Milan’s defenders; the former Benfica man took a shot to the close corner which was closer to Lopez who still couldn’t save it. The second-half was more pre-season-y, with the pace slower and less chances. There were some memorable moments, though – including two extremely poor corners taken by Honda and a miss by Jeremy Menez. Inzaghi has a lot to do before the start of the season – the defense is bad, the midfield is slow and confused and the attack predictable. Another loss. 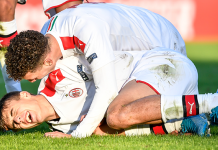 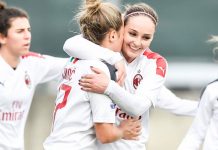 My opinion on the players in this match: Lopez: Was not at fault for the first goal, and also not really for the second, it was perfectly placed. He made one nervous mistake and was otherwise not really tested. Abate: Rather poor, attackers get past him way too easily, and he doesn`t offer much going forward, although this is also because he has no support on the right side. Albertazzi: Utter sh*t, why is this guy in Milan, clueless lacks any skill and speed, already 23 as well, must go. Solely at fault for second goal. Bonerror: So many wrong… Read more »

To think that Poli accused Seedorf of costing him a place in the Italian World Cup squad… enough said.

Milan Defense *NO*… Inzaghi soon u ll join Seedorf… I dont believe in you…. #ForzaMilan

Typical Zapata in this game, he has pace, he has strength…but he’s so sloppy while in posession, gives the ball away too easily, it’s not the first time. Muntari was a beast in midfield to be honest, and to think that Cristante is only 19…! Hope he’ll be given an honest chance this season, and not only now because it’s pre season, also hope to see Mastalli play more as i rate him highly. A midfield with Cristante-De jong-Sapo/Poli will look good until Monto is back, and then we have Muntari as back-up of course. Too early to judge Lopez… Read more »

We played well,we still need to make some good signing in our cb

Another loss! Do u guys take note of that statement? We will see

Again.. 2 goals from defender mistakes, Zapata and Albertazzi. But, it may not the main problem, because Zapata could sent out and Albertazzi id the only the 3rd choice. The main problem is in the middle which played slow with less creativity in both side of the midfield, especially in left side. I think Milan need to a signing here. Granier will be good in this position. Granier also can play in the right if Montolivo is ready to play in the left. Another signing should be in the right wing. Costa/Lavezzi or Campbell will be good addition. In this… Read more »

Funny how people call Zapata sloppy and incompetent, when he was actually our best defender today. Seriously, judge him on the basis of the whole game and not just that one scene. Apart from that one, admittedly tremendous, mistake, he was rock solid throughout the game. Bonera was far from solid and made three mistakes ala zapata´s one and still, only because none of them led to a goal, everybody is bashing zapata. Also Albertazzi is absolutely no milan material and should be sold together with Zaccardo. Armero seemed a bit “over-energetic”, didn´t see enough to judge him but at… Read more »

The Zapata situation is a bit awkward though, should we really start him if he makes huge mistakes quite often? (I agree that he was very solid apart from the mistake.)

However, I don`t think Rami & Alex would make such a good pair because they are both very similar players and really lack pace. We probably need a decent new cb with some pace.

Oh my god. What did i just read above? Muntari was a beast? He was as slow as a turtle and let the opponents run past him EASILY which led to a COUNTER ATTACK EVERYTIME! He was careless and wasn’t running to defend! Friendly or not, you’re supposed to help the team defend like SES did (even though he is a forward)

If you want to wear he Milan jersey, you have to run in every match like it’s the game of your life.

I disagree, I know he is very bad usually but he won a lot of balls, really much more than he gave away, he defended a lot, maybe not all the time, but was pretty solid.

I feel like you are just bashing him because you hate him.

Don’t hate him just for the sake of hating, if a player is good in a game I’ll admit it. Muntari won back a lot of balls and tackled hard throughout the game.

Abate is bad, in my opinion he never was a footballer. He runs and that’s all there is to him. As for Bonera: no comment… Lopez : he showed signs of greatness even if he was slippery in the 2nd goal. ARMERO : amazing in my opinion. He was the only one (after ses) trying to push the team forward. Great ball control, dribbling, and speed Cristante was epic, he made the right amount of forward runs, good passes, and at least he was marking well!!! Finally. I wouldn’t mind playing with a false 9 with ses-menez-honda up front. I… Read more »

@milan4life **Seedorf didn’t get fired because of poor results,he was fired for speaking out against the 75% trashy players we had in the team now.inzaghi is a puppet so I think he will keep his job for a long time no matter what happens

Apparently we have backed out of the cerci race but are still interested in pandev. If we sign pandev all my optimism for this season will be out the window.

Damn these corners from Honda HAHAHA Next NFL star :D:D

Inzaghi definitely has no game plan. Lack of creativity, lack of intelligence movement from the forwards. 90 minutes of play i saw no killer pass from our midfield. The worst of all…sloppy and unorganized defends.
i am pretty sure we will lose all three opening match with this situation.

FINALLY Honda shows why he should take more FKs, but apparently he shouldn´t take corners…very strange..

Milan are been sentimental about inzaghi. He lacks the basic knowledge at top level. The team he has now is better than what seedorf had yet he still struggle to perform. As far am I’m concerned, for as long as we have honda,essien, zaccado and inzaghi in that team,we would not get any where. Maybe,just maybe we should just hope not to relegate. Apparently we are still not ready. The identity created by seedorf is gone. You need to go watch our game against juventus at home. Even though we lost, it was obvious that we are already creating our… Read more »

I don’t know what to think about this team. Our pre-season matches were worse than what any milan fan would think of. And the writer of the article said it all in his last sentence. The problem is, this team is not a team at all. It’s mostly about individual skills or goals. If you look thoroughly our previous matches, you would see a lot of our goals come from free kicks, penalties, long range shots. Sure we don’t mind how the goals are being scored as long as we win, but this affect the performances of the midfielders and… Read more »

Simply put.. Milan are not a serious club anymore. They played the match as if they haven’t been training together at all.. That free kick set up though, it wasn’t about the goal, the set up was very tricky which is what the goalkeeper was complaining to the referee about don’t know if you guys saw it, but that said, it’s unbelievable that we can’t score or create goals from open play.

Cant this Milan management do away with Bonera, what a player.

Reports claim that Milan backed out of the race of signing cerci.

I fear we will end up with Pandev and Dzemaili – No Douglas Costa no Grenier (which I prefer over Rabiot, because he is a little bit older – We have Cristante, Mastalli,… we need some more experienced midfielder)

This would allow Honda to play in his natural position and maybe the dm’s would give us some stability in the back.

inzaghi has taken ac milan back where alegri let it when he got fired… all what seedorf build and the great porformence he got out of the team the last 2 months of seria A is all destroid… we have not won yeat a mach from a profosional team… i dont think inzaghi has a plan, he thinks anyone can play anywere, like the primevare where you have to find the right position to the young players… but no this players have allredy a position where they have ben playn for menny years dont test them in other positions… like… Read more »

Pellegrini has said that Nastasic can leave City- get the cheque book out Galliani, that boy is a great defender!

We need more than 2 players escpecially a right winger, a midfieldee and maybe a defender!!
our team lack creativity in attack!! It seems that we can only score with freekicks, corners or individual skills!! I see there no TEAM!
Valencia played better than Milan!!

Those guys that conspired against Seedorf are all sh**s,Poli,Pazzini,Ignazio,Montolivo and co.

Abate never said anything bad about Seedorf..If he did, tell me what he said in his exact words.

© Copyright 2009-2019 RossoneriBlog, All Rights Reserved
wpDiscuz
30
0
Would love your thoughts, please comment.x
()
x
| Reply
We use cookies to ensure that we give you the best experience on our website. If you continue to use this site we will assume that you are happy with it.Ok