MILAN GOT a good and hard fought win over Bologna at Stadio San Siro on Friday night. Like in many occasions this term, the Rossoneri had more of the ball but struggled to convert possession into real goalscoring chances and seemed confused and lackluster in the final third. In the second half Milan showed a bit more intent but Bologna also had a couple of chances to get on the scoresheet. The only goal in the game came in the 85th minute and what a goal that was: Mario Balotelli found some space far away from the box but decided to fire a shot anyways to score an absolutely stunning goal. Mario, who like many of his teammates, was disappointing in the game, won it for Clarence Seedorf ahead of the Champions League match against Atletico Madrid on Wednesday at the Giuseppe Meazza. 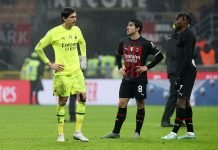 Forza Milan, we need to improve. But I will take this win Like Huge victory.

you guys saw the new physio seedoof is a boss

Three points is all that matters, Forza Milan

Victory @last forza milan we did it i hope so against atletico mardrid,guy pls update me on d players performance especialy taarabt

People critcize Balo, Abbiati and Monto. I think they were among our best players out there. Abbiati’s two saves were world class, along with Balo’s strike of course. Monto kept on pushing forward, but we all know he can do a lot better than tonight as well! Rami is looking really solid, and that makes me glad, but he hasn’t really been put to a great test. I won’t count Napoli as the entire team effort was poor, he stood out among the back four in that game, but that wasn’t such a hard thing to do anyways. Three points… Read more »

3 very precious points. Rami & Taabrat were best performers. Overall the team played better than against Napoli. That is positive. But the biggest event was after the match when Seedorf shouted at Balo (he was already leaving the pitch) to return and join his team mates in the centre of the pitch. Balo did obeyed and even exchanged his jersey with an opponent. Yeah that is the spirit we all want to see in Balo and the entire team. Good piece of work by Seedorf.

What a goal by Balotelli. I wonder what Muntari told him after he scored that goal, seemed pretty serious. I hope it was: ” That was a fantastic goal, but your performance tonight has been awful. Get yourself together and play football like you really want to!” Just look at Pazzo, comes in and is doing a great effort in front of goal, running into spaces, wants the ball. Balo just walks around on the pich for 85min, not going in any attacking duels and makes no real effort trying to get a goal. We have no Pirlo in our… Read more »

That goal left me with no words and goose bumps….unreal 🙂

I think balo should play behind the striker alwayssssss in a free roaming role. It will make him as dangerous as he can be. On a different note, if everyone worked as hard as pazzini and poli and even tarrabt these last couple games, we will go much farther

What a beauty…that’s possibly goal of the season. Thanks so much for the Valentine’s day present Balotelli lol

Soul-crushing performance once again. Seedorf you are a joke. If anyone really needs me to explain why feel free to ask.

Dude ur talking like YOU know whats best!!!!! His the coach let him handle it….HE knows wat his doing…(I hope) 😛

Well for some reason Seedorf seems to have no trust in youth, combined with questionable player selections. His substitutions are mostly un-inspiring and even though I appreciate the attempt to play a high pressing game with a more attacking 4-2-3-1, with the players he is using in the roles he puts them in, it is not working. This is not a question of give it time. He has all the time in the world. Champions League qualification is not possible. Europa League qualification is not an achievement and is more trouble than it’s worth. Seedorf has a rare opportunity to… Read more »

well said, i think you should be coaching,hehe, but yeah jokes aside, i wasnt able to watch the game but i did hear that milan were pretty sluggish in their build up and i have to agree, we need honda at his RIGHT position, watching this guy against Italy in the confed cup, HE DOMINATED THE DEFENCE ALONE, chiellini and co were swept aside, we need someone like him to crack open defences with his vision and skill and provide lay off’s to our strikers. When i first heard he was coming to Milan, i was over the moon, but… Read more »

hey dude! thank you for your long text but there are only facts that matter! seedorf gained more points in avg than allegri! so leave him alone and give him damn time! you cannt put the youth in this difficult moment! this can only destroy them. and sorry, except el sha, cristante and balo! we dont have any experienced youth who can help us! de sciglio was totally rubbish for 2nd concessive match!what expect you from a coach after: 1. 3 weeks 2. no serious experience (got talent though) 3. taking a team in crisis like Milan give him time… Read more »

i though those puma advertises were lie haha

This victory belongs to Pazzini. I have been advocating that Balo is not as out n out striker. When pazzini enters balo is free to show his talent n not his back against the goal. When he drifts out there’s no1 in the box. So plssss Seedorf. Start pazzini from the start with balo. If not we will just he stagnant even with all the passers n offensive players.

This goal will boost Marios confidence against athletico and the win will boost us as well!!

Rami is a beast!! Diego costa ain’t gonna do nothing against Rami!

Am surprised that no one is talking about the injuries our players keep getting. Did seedorf rush zapata back? did seedorf training method injure cristante? Thatz the question we ll all ask if we had allegri… Mean while why is saponara not getting any playing chance under seedorf? Even b4 cristante got injured, he neva gave him a chance, why did seedorf personal request for essien when jorginho was ȋ̝̊̅̄n the market? These are just the few questions bodering me… Have a. Great day feLlow milanistas

Hi Guys what do some of you thinking which teams doest’n need luck in their games havent you watch the match or bologna didnt come out they needed a draw or get some lucky counter attack we just need the 3 points that all matters ,do you even play football to know this , you dont that why you talking like this ,In football if your opponet do not come how can you score but Thanks be to All Mighty Allah that we won.Please what ever you see on the field just support your be loved Milan thank you all..Forza… Read more »

Kaka haven’t played football for 2 years.If he plays a lot,next season he will be on of the best if not best footballer in the world (again).

My note is balo can’t play as alone striker, if we want to play seedorf role he must play balo as left or right winger, so the defender not very close to him an he make many move, milan need more fluid movement at midfield sector, i think balo and honda can do that, and let pazzo as lone striker like our super pippo..
4 cl formation againts at. Mad