Rossoneri Blog – AC Milan News
Home News Seedorf: “I will be the next coach of Milan”

CLARENCE SEEDORF has announced he’s retired from football and will be the coach of Milan for the next 2.5 years.

Milan only sacked Allegri yesterday after the shameful 4-3 defeat to Sassuolo but they already have a new coach and it’s non-other than Silvio Berlusconi’s very own choice Clarence Seedorf who until this morning was still an active player.

Berlusconi wanted to appoint Seedorf already in the last summer but in the end Allegri stayed and coached Milan in the first months of this Serie A season, perhaps some of the worst months Milan have had in recent memory. It’s ‘Dorf time now.

“I’m here to announce that I will retire from playing football now. I stop playing football after 22 years. It was a tough night but I’m satisfied with what I’ve done in my career and with what I did with Botafogo,” Seedorf, who will land in Italy tomorrow at the Linate airport at 18:40 CET / Italy time, said in a press conference he held on Tuesday. “I will be Milan’s next coach.

“I’ve learned many things at Botafogo and this experience has made me grow a lot. It will help me in my new job as Milan’s coach. My experience at Botafogo was intense. The thing I really learned was to adapt to any situation, even the most difficult ones. I could not say no to President Silvio Berlusconi when he called me, after having spent 10 years at Milan. I like challenges, and coaching Milan will be another challenge in my career The sacking of Allegri was crucial for my decision.

“The call from Galliani only came yesterday. I don’t know which formation I will use at Milan. I’ve played with seven of the current players, and that will help me. I made the decision to join Milan today, but last night was a difficult night for me. But I made the right choice. When I told my kids that I would be returning to Milan, they went all quiet. But they aren’t against it.

“Coaching Milan is a dream come true for me. I’m very happy about the opportunity that Milan have given me, and I’m very motivated. Galliani called me while I was training, and it was really a surprise for me. A possible Club World Cup final between Botafogo and Milan? I would really like that. Botafogo have to think big,” continued the 37-year-old, who played 432 games, won the Champions League – twice – with the Milan shirt and scored 62 goals in all competitions from 02-12.

“I spent a lot of time at Milan, so it’s only normal that I have a special relationship with them. I want to keep on helping, not on the pitch, but off it, by commanding my players. I have the courage to follow my heart from time to time. The heart is hardly ever wrong. Being a coach? I’ve always wanted to become a coach, but I didn’t know when it would happen.

“When you get an opportunity you have to take it.” Seedorf will become the first Dutch to ever coach a Serie A team and the 2nd black man to do so. Jaap Stam and Hernan Crespo could join Seedorf’s coaching staff next season. The idea is to get a coach for each department so Stam would be the assistant (his current role at Ajax) and the defenders coach, Seedorf head coach and midfielders coach and Crespo would coach the forwards. Mauro Tassotti will leave at the end of the year.

Milan haven’t made Clarence’s appointment official yet and Tassotti will coach Milan against Spezia Calcio in the Coppa Italia tomorrow. Seedorf will be the coach for the next 2.5 years and it’ll be his first-ever experience as a coach at any level. 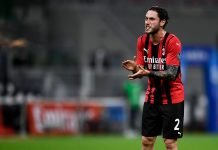 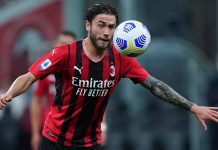 Calabria has undergone sports hernia surgery on Thursday, recovery time is estimated to be 6 weeks 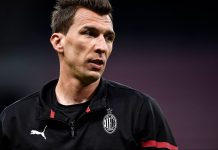 Mandžukić: “It was a pleasure to play for Milan, I am thankful to the club for giving me the opportunity”

Best of wishes from all milanistas around the world…

Best of wishes to guy that i call my uncle here in Africa.. Forza mr Seedorf n Forza Milan

When Berlusconi makes his choice, he gets it right and supports the coach financially. Hope your arrival brings Milan back to glory days.

Hmm Seedorf, Stam and Crespo? Very interesting. Im really skeptical about an entirely new coaching staff and the old guys are getting laid off all at once. I’d have preffered a smooth transition to a steep one as we witnessed it nearly distroyed us laying off all our veterans almost at once! I dint like Allegri bt i heard gud things abt tassoti, i wud have preferred him stayin 4 a couple more years to layer in seedorf properly before d new guys come but oh well… I guez its done, i love Clearance personally and i hope he wil… Read more »

Tassotti is staying until his contract ends in summer ( at least ) I also hope he stays beyond it as it’s good to keep some things intact in transitional period.

Good luck for you, and for us

can I ask you something?

1.Sell:Constant,Birsa,Muntari,Nocerino,Emanuelson,Zapata/Mexes,Baloteli.
2.Play youngsters like:De Schilio,Cristante,Petagna,LLoti,Perchiuchi.
3. Buy two young talented CB’s and a LB
4.No more below average player signings,and no more NO DISCIPLINE and no respect for the Milan shirt. Baloteli is a good example how you should NOT behave.
5.Bring Sheva in your stuff.

Would love to see Pacifico and Vergara get some burn. Maybe bring in Doria. Would have a lot of good young options in the back (De Sciglio, Pacifico, Vergara, Doria) to add to Rami and Abate.

Forza Milan! Forza Seedorf! There is nowhere else for Milan to go but up! Buffon thinks Allegri’s sack was not fair. What do you expect from a Juventud? Allegri gave them Pirlo and still gripes about Muntari’s ghost goal…

“a coach for each department so Stam would be the assistant (his current role at Ajax) and the defenders coach, Seedorf head coach and midfielders coach and Crespo would coach the forwards”…I like it already:-)

There were reports a few weeks bck sayn Doria wud com along with seedorf in june…i say well seedorf is here..Doria y dnt u hop on d same plane to Milan?! 🙂 Hop he succedds. FORZA SEEDORF. FORZA MILAN. N if a few results don go his way…hop ppl don battr him.

milan will be better with a focused coach…forza milan and seedorf make us smile again.

They will pay arround 7 millions for half of the player! Can’t we even pay 7 millions? This management do nothing!

If Silvio Berlusconi says he wants this to happen, he will stick by it. Berlusconi said he wanted Allegri, and he bought Ibra, Robinho, KPB, and many more. Hopefully he will support Seedorf with the right transfers.

Welcome back Seadorf, I know Milan made the right choice bringing back as coach this time. Happy to see the end of Allegri’s era

whoa!!! milan will have seedorf,pippo,stam and crespo as coaches…reminds me of the good old days…forza milan

This is madness!!! Seedorf has no experience as a coach. He wl only use try n error system on milan. Blv me Seedorf won’t last at milan. He wl b a david moyes in milan. Get a gud n full tym coach not a less than half baked coach.

Go and cry with that moronic Allegri or even better give him your shoulders to reflect on things. Milan needs some spirit back and that can only come from champions who won with Milan. Yes, you heard me right. There were two candidates and both of them would have been alright, Pippo will be one for the future but the hard task of getting Milan back to what it was now felt upon the right and capable man, Seedorf. We will no longer see ugly muscle players like Constant, Muntari, and no misdemeanor that we got accustomed with from players… Read more »

the Black Pep Guardiola is in town!

Welcome back Seedorf! I have to say I´m really happy about this, finally someone who has his heart at Milan is going to be in charge of the club. I wish him all the best for the next few years and hope he gets the backing and patience he deserves, even if he doesn´t turn things around immediately. Although I´m sure it won´t take him long 😉

This is plain unfair to Mauro Tassotti, ffs.

Best of luck to u, to the club and it’s fans at large. Forza milano

Right this moment Milan needs Legends with strong personality in Mgt who are able to earn respect from their players & transmit the passion of this jersey. Milan have everything just missing respect & passion.Therefore i think this is a good move. Forza Rossoneri

Welcome home our great legend one of the best to hav the number 10 jersey is back to proove how talented he is….forza milan

I heard that as well and I totally agree with Seedorf. I read a statement on the internet that Seedorf said “Balotelli is uncoachable” I totally agree!

Just look at his past and you will see no coach has been able to get the best out of him.

Prandelli doesn’t work with Balotelli day in day out so it is difficult to measure how Prandelli would deal with him at a club level.