MILAN FINISHED the 2013 edition of the Guinness International Champions Cup in third place, beating Galaxy 2-0 at the SunLife Stadium in Miami. The first half was highly entertaining with end-to-end stuff mostly. In the 17th minute, Milan took advantage of a defensive mishap at Galaxy – Mario Balotelli got the ball in the box, turned well and scored calmly to give Milan the lead. Milan continued to attack with Balo, Stephan El Shaarawy and M’Baye Niang combining well at the top, Galaxy also had their chances but could get pas Christian Abbiati. In the 40th minute, Milan doubled the score through Niang who did everything by himself at the edge of the box and then took a shot from distance which went in after hitting the post. There were many substitutes in the second half and the notable thing was Super Mario Balotelli walking off the pitch and seemed injured. Milan win 2-0 and their next game is the Champions League playoff match. 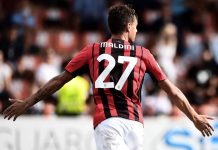 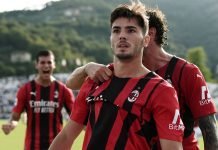 Good game regardless of it being LA, niang proved he is dangerous, glad he scored and el aha and balo had good games as well. Surprisingly for me, muntari actually had a good half, the reason I am not in favor of muntari is because he has so many misplaced passes but what a shot at the end of the game. Woulda been a goal to remember of that snuck in.

I believe in niang. He is only 18 and his is doing great. He just needs to learn a few simple things and he is ready.

Niang what a player… He needs some adjustments, tiny tiny, and this boy will kick ass..

zapata and niang were good, silvestre and emanuelson were nervous, team played well

Niang scored a great goal, but in any case, he still got the problem wich so many other players got; finnishing.
After watching this highlights, yet again, we should have won more like 4-0. We need to be more accurate in front of goal! I really hope Il Faraone gets in scoring form as soon as the serie-a starts, same with Niang. Forza Milan

pazzini is the finisher we are missing…

If we end 3rd on the Champions League I would be surprised.

zapata had a quiet good game ..
niang scored maybe his confidence will go up and ran like crazy on the right
muntari is simply underrated without a doubt

No one spoke about the commander in chief of our midfield. “Nigel de jong” City lost a great player.

Poli is great.. Wecan hhave a great midfield with poli de Jong and Montolivo with boateng as sub… Another player that has really impressed me since last January is zapata.. He’sbeen a rock

Should have played emanuelson as leftback since the beginning