MILAN WERE close, but their comeback wasn’t enough on Tuesday evening at Stadio Renzo Barbera against Palermo. Milan started the game with a 3-5-2 formation and it didn’t work at all as Palermo were the better side and got the lead through Fabrizio Miccoli in the 45+1′ minute as the Italian converted a very questionable penalty. Franco Brienza scored the second goal for Palermo right after the second half kickoff (47′) and Massimiliano Allegri was forced to introduce new players in, bringing on Urby Emanuelson (half time), Bojan Krkic and Giampaolo Pazzini. Krkic was absolutely phenomenal when he came in as he led Milan’s comeback along with Riccardo Montolivo, who pulled one back for Milan in the 69′ minute. Stephan El Shaarawy made it 2-2 in the 80′ minute but it was too little too late again for Milan who still haven’t won two games in a row this season, collecting just 11 from 30 points. 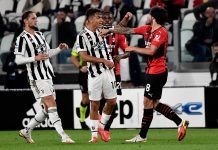 3-5-2 with Bonera holdin’ is not hygenic, Mexes would’ve been better. However, I don’t support the formation.

I like the fact he’s been changing formations and players but not 3-5-2.

I think El Shaarawy needs to rest now as he looked lost in the 2nd half of the game and then the goal came. Bojan, Pato and Urby upfront I guess for next match.

No Pazzini, He was lost in yesterday’s match. I’ve never seen a striker that hides at the back of a defender.

It was good comeback though.

Pazzini is a good target man, we should give him better crosses so he can head them in. If we don’t have Pazzini there, we don’t have a player who can head balls somewhere because no other striker has the jumping power that Pazzini has. We need him. Urby is poor at making decisions in the attacking third. We’ve screwed up many good attacking moves because of Urby, he just never can’t use his weak right foot and that’s why it’s a very poor idea from Allegri to move him to the right side. I prefer 4-2-3-1, it has worked… Read more »

good come back for the point milan . Tony m i totally agree with u from the comment made in the previous blog . FORZA MILAN

“GOOD comeback”? what were they doing going 2 down in the first place??! Milan should not consider anything “Good” which does not give them three points, regardless coming from 6 goals down for a point. seem Allegri is now inffecting the fans with his Cagliari mentality. he made this club so used to lossing that a draw looks ok.

@Pa ibra u are right. Why shd people be happy when milan get a draw.

I think it’s a waste, playing our best central defender (Mexes) in a formation in which he clearly doesn’t thrive in. We should revert to the 4-2-3-1, I think we played our best football with that formation. Enough with the experiments, we wanted to see some tactical flexibility, and now it’s too much of it. I’m glad though to see Abate finding his form, I think he’s been much better in the games against Genoa and last night against Palermo.
I think Bojan will start ahead of El Shaarawy against Chievo, so he could get some rest.

btw, both yepes and bonera are suspended against Chievo, it will be fun to see acerbi-mexes-zapata, but i would prefer to see a four man backline though.

It’s the best we got right now Krkic needs to play as AMF.

that slash mean either acerbi or zapata…

Thanks for clearing that up, don’t know why “Ouch!” and “1five1” doesn’t understand that…

I always liked Pato, but to be honest Pato will never be a world class player.

Once Muntari is fully fit I think our first choice starting lineup should look something like this.

Monty is so much more effective as an attacking minded player. Proof National games with Italy!

lol…thought twas my eyes decieving me. So if u were d coach u’d accidentally field 12 instead of 11 players. n u wanna correct allegri?

He only fielded 11. He said Zapata or Acerbi

@ouch, do u see a slash anywhere?

For people blaming Pato and comparing him to bojan and all that talking…
first half was awful, because no one could give not even one pass. the ball did not reach the attack. or maybe it did once.
its the same for SES, he did nothing as forward because no final pass was made.
the second half was different, can pass emanuelson can too. it was fifferent in the second half.
first half was pure allegri s fault.
so please people stop saying things just for saying it.

The truth is Pato’s been back for 4 matches now and been crap in every one of them. We’ve all been awaiting his return because SES is the only one scoring and instead he’s playing like he’s having a kick-around in the park. Not selling him to PSG was one of Milan’s biggest mistakes of the last 20 years.

There are reports that milan will sell robinho in january. it shows that the selling streak will continue even in january. That is whileat B&G knows how to do best. Am sure that the reason for them selling Robinho won’t be sporti but rather economic one. We should not expect any major change in january but rather expect more out of contract players to be signed.

the game against palermo, we start with 3-5-2 and play awful, then after palermo second goal, we play something like 4-1-2-2-1 or 4-2-4 with all side back going forward if possible. we play better and pressure them at second half. but we only got 1 point. lately milan been playing awful at first half and getting better at second half. are we still experimenting right now? why don’t we play that better play and tactics from the start instead of changing tactics and player after play ridiculous at first. its weird that milan always play better after getting behind. maybe… Read more »