ALEXANDRE PATO and Kevin-Prince Boateng are expected to be part of the starting XI against Genoa.

Milan have had an absolute nightmare of a season so far with only seven points collected in 8 Serie A games, putting Allegri’s team in 15th place as just goal differential keeps them above the relegation zone.

The Rossoneri take on Genoa this evening after yet another defeat, in the Champions League to the surprising Malaga, and Allegri is preparing some more changes, although the 3-man defense will stay.

Milan-Genoa: The Rossoneri squad
Why is Max Allegri still the Manager at Milan?

According to the words of Allegri and today’s edition of La Gazzetta dello Sport , Alexandre Pato is set to make his debut start this season; in fact – he’ll be his first start for the red & black side in eight months as he was suffering from various injuries last season as he only featured in 11 games in the Italian league.

Along with Pato, Kevin-Prince Boateng will also return to the starting XI. Boateng has been the most disappointing player of the season, as he looks lazy and with no desire to play football. He was sent to the stands in the match against Malaga due to poor form, and Allegri hopes to get a strong reaction from him in the match tonight. Gazzetta expects Boateng to play right behind Alex Pato and Stephan El Shaarawy.

Allegri confirmed yesterday that he will continue to use three centre backs. Allegri still hasn’t lost to Genoa in his Milan days (three wins and one draw) and he believes a win is nothing less than essential tonight.

Calabria suffered an injury to his right hamstring and should be out for 3 months, Kjær to return in 2 weeks

Saelemaekers suffered a partial tear in his left knee’s MCL, he’s expected to miss the rest of Milan’s 2022 games 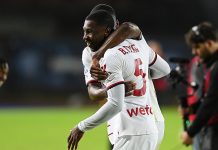 but allegri will stick with bonera.
Nd when genoa will attak he will make us switch to 5 3 2 with emmanul nd abate d wing baks.
When will allegri b more creative nd so obvious.
Nd plz dnt play pazzini at all, he iz useless xcuse for a striker.
Hope we win
Forza MILAN!!!

Replace Bonera with ZAPATA and put supersub pazzi in the second half !!! BONERA PLEASE GO !!

mexes acerbi zapata for center back

Allegri….. Boateng again behind strikers… You are pathetic fool why not swap boateng and montolivo. Thank God bonera will collect yellow card and miss parlemo.

this is perfect. now its up to the boys…come on milan !!!

3 men defence huh? The new itialian trend and eryone is jumping on the band wagon. We saw how that defence got decimated by malaga. A weak mid field meant the CB will have to close down out of their zone, blatant mistake my Max! Instead of trying to contain malaga’s hold on the game,he brought in more attacking players leaving just 2 mid-fielders when we was chasing possesion. What he needed was his ol’ 4-3-1-2, De Sceglio had an awful game, pull him out for Noce and Bojan behind Pato and El Sha! I’m a big Allegri fan but… Read more »

Pls Bojan instead of Boateng

I pray we win

Switch places with Boateng and Montolivo, and play Acerbi instead of Yepes, let him have some continuity, or Zapata instead of him or Bonera, and the line-up looks great, real great.
But Allegri also said that De jong will start with Ambrosini…so I don’t know, we’ll see, no matter what I hope we get our win and our players show greater form and desire than before!

If this is how we’re going to set up we’re screwed yet again. Bonera and Yepes shouldn’t be anywhere near this team when we have Zapata, Mexes and (even) Acerbi. Abate’s great for the national team but useless lately for Milan for some reason — swinging in hopeless crosses all evening and reverting to his old lapses at the back. Boateng is crap in that position and the whole world can see Monty should be playing there instead, except Allegri. Bojan will spend the entire match on the bench when he’s the only one along with SES who ever looks… Read more »

This formation is awesome. But we should take the advantage of loosing by make the young players ” titolare” starters, in order to gain the experience with milan. Instead loosing with oldies ” Yepes and Bonera”, is better to loose with youngster ” acerbi and zapata” because they are good players and will be better in the future.

hope we lose this, and get a new coach, who can use the talent and c the real pontentiel in this squad.

allegri is in love with bonera manager with no tatics

Pato had an injury reading this article.

bonera again!!? how the hell hes still playing from the beginning, abate this time is in right posiion,but monti should play instead boa,anyways till bonera plays we will lose… milan 0-1 genoa 8′ bonera own goal

I heard Boa was out with a knee injury

Calabria suffered an injury to his right hamstring and should be out for 3 months, Kjær to return in...

Saelemaekers suffered a partial tear in his left knee’s MCL, he’s expected to miss the rest of Milan’s 2022...