KOBE BRYANT says he will not betray the Rossoneri colors after Materazzi gave him an Inter shirt.

Milan have many celebrity fans: Novak Djokovic, the No. 1 Tennis player in the World at the moment, has never made it a secret that he’s a big fan of Milan and Zlatan Ibrahimovic, and he met them a few times.

People may have not known however that along with the likes of Djokovic and Formula 1 driver Felipe Massa on the list of famous people that support Milan, there is also NBA superstar Kobe Bryant.

“As a child, when my father played in Italy, I was an AC Milan fan. I do not want to change teams even though [Marco] Materazzi gave me an Inter shirt and tried to get me into betraying the Rossoneri colors,” Kobe said. The Los Angeles Lakers shooting guard could return to Italy, as Bologna are interested in him.

With the NBA still striking, the 33-year-old Basketball player admitted he’d be considering a move to Virtus Bologna, that have reportedly offered him a contract worth $2.5 million a month – $15mil a season. 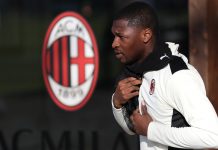 Official: Ballo-Touré has tested positive for Covid-19, Tătăruşanu is negative and has recovered

Milan is made of champions and also have fans of champions. FORZA MILAN!! Wow mba players have great deals. Is the mba bologna and football bologna under the same ownership?

did he dunk on you or somethin’?

dude was wearing Gala colours earlier, and barca too

i think he is a football fan, but i wonder… who is he supporting in Milan-Barca

He supports Milan of course cuz he grew in Italy and his favorite player is Marco Van Basten :).

We r family at milan kobe.. We wil make u feel at home.

Best Basketball player in the world supports us!! haha

KPB IS BACK IN TRAINING!!!

I read in an interview YEARS ago that he was a Barcelona fan. He did admit to living in Italy and that he liked football (soccer), but never mentioned anything about Milan…

He is a Milan fan, More ever then Barcelona.

He Played for Milan Basketball team.

But i want to see him now on every Milan game, while he is in Italy.

there’s a lockout in the nba..which means no NBA…the season will probably start late, sometime in january….until then all of the players are looking for different places to play..italy, spain, turkey, russia,etc…bologna are going to pay kobe 2.5m for 10 games or something.

Never cared much for American sports.

the entire world plays it…not my fault you cant handle the rock..hahaha

That means he’s a barcelona and milan fan

whats up wit dis dude?he’s a barca fan i’ve seen him countless times wearing barca jersey,hanging around wit barca players..infact during their pre season tour he played with them along side Alex Morgan,Mia Hamm..i think it was organised by the barca foundation & Mia Hamm is like their ambassador..So Kobe make a choice already Rossoneri or Blaugrana?