MILAN‘S SQUAD for tomorrow consists of every player but Jankulovski.

The Rossoneri are getting ready for the very-important game with A.S. Roma when they know that even a draw would be enough for them to clinch the Scudetto already on Saturday.

AC Milan did not publish a squad list today as boss Massimiliano Allegri has called-up every player but the injured Marek Jankulovski who is suffering from a serious knee problem.

This means that even Filippo Inzaghi is called-up, despite it isn’t believed that he will be fit enough even for the bench, where Antonio Cassano and Alexandre Pato (got back from an injury) will be sitting. 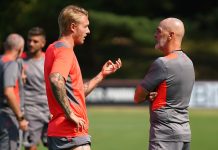 Looks like he wants everybody to be there to celebrate 😉

Pirlo or Merkel or Strasser in Seedorf out(Play as a sub.)Forza Milan!!

good, rest pato for palermo. no use risking him when all we need is a draw

Flamini instead of Gattuso please!

I would prefer a win even though we only need a draw.This team will do it as they must be fired up for this match. I’m happy for Mr Allegri especially since he is a rookie coach winning his first scudetto with a big club. Milan made the right choice in getting rid of Leonardo for Allegri!

A very charismatic gutsy man. By the way, if you’re wondering… Abate did make training and he trained fully with his teammates. So he will play this match. We need everyone ready. And we must go for the win. No settling for the draw.

In rome Draw is scudetto!then get win in palermo for copa!

Just cant wait 2 celebrate. I feel for jank but we all are 1 in spirit world wide. I’m very happy that allegri is gradually silencing his critics FORZA MILAN!!!. . . .1 luv

going to be a huge fiesta at olimpico.. i hope the roma fans dont bother which they probably wont.. they hate inter and juve anyways.. 😀 FORZA MILAN!!!

Winning the game tomorrow will be like winning the scudetto! Finally, AC Milan are going to make my summer even better.. I have been waiting for the scudetto to LONG!

forgetting your work then mate, tonight shall be the moment of truth for all of us…

just get your boss sleep with some drugs and you can party with us!