MILAN couldn’t get more than a draw against Catania and have to thank Inzaghi once again,as the veteran forward did well to score from Ronaldinho’s assist.

Milan was once saved by Pippo Inzaghi, who scored the equaliser after Catania had taken the lead with Capuano’s goal. Ronaldinho had a great performance, too. the team had a slow start to the game and Catania were quite organised, pressed well in midfield and were always dangerous when Milan lost the ball, meaning that the Rossoneri had some problems with their opponents’ counter-attacks, leaving too much space at the back.

Boateng worked his socks off in midfield for Milan. The goal had a good effect on the Rossoneri, as the team played much better after the break. 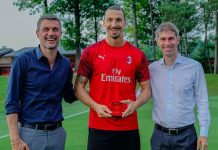 Oh Oh Daniele Galluzo please set yourself in the right frame of mind before you post any article , you should try to be honest and clean on what you want to express dont fear nothing, Milan was once saved by Pippo Inzaghi ,god Forbid , did u forget the sitter’s he missed and at most good chances he stood offside all the while , he isnt a saviour , Senior players get off for thier mistakes , more than the hits always talk about the misses , thats how u get your respect