Surprises in Milan’s line-up, as Brazilian goalkeeper Nelson Dida, returns to the goal after months. Marco Storari is said to suffer from an injury, and Dida will make his debut.

Thiago Silva comes back to alongside Alessandro Nesta. Abate starts in midfield, while Massimo Oddo gets a chance. Ronaldinho takes the place near to Pato, instead of Huntelaar or Borriello.

At Rome, Totti is out due to an injury. Meanwhile, goalkeeper Doni returns between the sticks while Menez, Vucinic takes the places up front.

Both coaches, Leonardo and Claudio Ranieri have been told to line-up a 4-4-2 formation, but we can see that only during the match that kicks off 8:45 PM CET. Rosetti will referee the match. 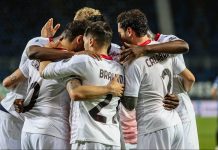 Finished: Atalanta 0-2 Milan – the Rossoneri finish the season in 2nd place and qualify for the Champions League!! 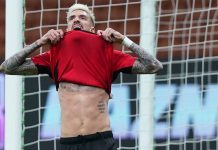 Too bad Totti is out, but still, we’re going to beat you in few minutes, Hala Roma!

Ibra underwent an arthroscopic lavage to his left knee on Friday, recovery times are estimated to be 8 weeks

Gazidis: “We witnessed a special season, the CL was a deserved win, this group is special, I am lost...

Official: Tomori joins Milan from Chelsea on a four-year deal