Ignazio Abate spoke to La Gazzetta about how he became a coach and discussed some individuals.

Something is happening in Milan’s Primavera: the team that was saved from relegation on the last Matchday in May is still struggling in the league (12th place), but in the UEFA Youth League they won their group consisting of Chelsea, Red Bull Salzburg and Dinamo Zagreb.

The coach is Ignazio Abate, who in 2020 thought he would never coach in his life, but in 2021 took Milan’s Under 16 to the Scudetto final – losing in extra time – and then got promoted to the Primavera.

Abate spoke to La Gazzetta dello Sport’s Luca Bianchin in an interview that was published today:

How did it come about?
“I thought I would become a director, in fact I completed the Sporting Director course. The only one who didn’t believe it was my wife. She was telling me: ‘You are going to be a coach’, and I was like: ‘No, it is impossible’. I signed up for the course just to complete the training and it was love at first sight. Butterflies in the stomach, a vocation that takes your mind. Sometimes someone talks to me and I stare into space: I am thinking about the match or the team.”

Are you satisfied with the team?
“Yes, I am convinced that we are laying the foundation for the future of the Primavera. I love building from the back and having the ball because you improve with the ball. And I let the very young ones play, without fear of sending them onto the pitch with older guys.”

Names. Andrei Coubiș, who arrived in 2019, is Captain. Is this the coach’s choice?
“Yes, I wanted to empower him. He speaks little but I think he can lead the group.”

Marko Lazetić scored three goals against Atalanta…
“I am pleased. He is humble and he has a positive attitude: he is an example for all his teammates.”

Can Chaka Traorè make it to Serie A?
“He has above-average quality and great physical gifts. He can score 20 goals a year but he needs to find consistency.”

What role does Youns El Hilali play in the group?
“Now he has responsibilities: he is the Vice-Captain. I expect a lot from the mental point of view, to make his teammates grow.”

Last two: Hugo Cuenca and Filippo Scotti. How strong can they become?
“Cuenca was unlucky, he arrived without preparation and got injured but now he has almost recovered. Scotti, well, he was born 2006, I took him to the Primavera when he was 15. You must have a not indifferent personality to hold on.”

Raffaele Palladino and Salvatore Bocchetti, meanwhile, demonstrate that you can go from the Primavera to Serie A…
“Thanks to coaches like them the level of the Primavera has risen a lot.”

Favorite coach among near-peers, say between 35-years-old and 45-years-old?
“De Zerbi seems to me like a top one. I, however, am very lucky to work next to Pioli, who humanly is off the charts and tactically is on the cutting edge. When I can, I stop by to watch his training sessions or have him explain how he prepares a match. He opens my mind.”

What are the guys like in 2022?
“They are very different from us, maybe smarter, certainly with fewer personal relationships: they are always on social media a lot, but in football the same rules always apply. You have to be a group, have education and respect, and know that if you don’t suffer now you can’t rejoice tomorrow. Some people look at me crookedly, then they understand that I do it for their own good. In general, I feel them close, they confide in each other.”

So, let’s look ahead. What will the football of the future look like?
“It will be crucial to read individual tactical situations, which change in a second. And the goalkeeper will be even more decisive.”

Maldini: “The idea was to close Leão’s renewal before the World Cup but it was not possible, we’ll have a chance to talk with... 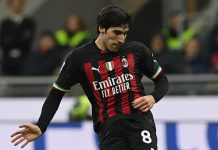