Musacchio was the first purchase made by Massimiliano Mirabelli and Marco Fassone in the 2017. However, over the years Mateo has lost his place in the starting XI.

The contract of the player was due to expire at the end of the season and instead of seeing out his deal at the club, he’s decided to leave in this mercato.

“Milan announces that player Mateo Pablo Musacchio has joined Lazio on a permanent deal. The Club would like to thank Mateo and wishes him all the best in his personal life and professional career,” a statement on the Rossoneri club reads. 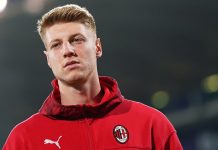 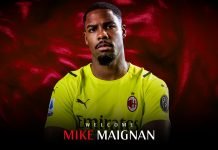 Official: Maignan joins Milan from Lille on a five-year deal 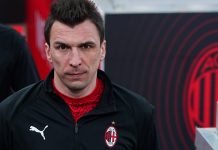 2021 January mercato comes to an end

Pioli will ruin milan before leaving with his biased decisions on players ,on personal level I prefer mussachio to the so called tomori and I wonder y milan squad are always having injuries like no other club ,no time all the players will be complete to choose from ,it’s a cause for worry o

No disrespect but you the dumbest fan I have ever read his post on this blog, wondering what you been watching

These injuries we getting is really pissing me off, we so unlucky it’s unbelievable. We have done so well to cope the way we have and top the league. But I still feel if we had been more fortunate with injuries /covid we would have more points and a stronger position to defend lead

in a way we have been unfortunate but at the same time we havent. All teams are dealing with injuries and covid. The difference between us and clubs “ahead” of us is depth.
Juve has not have their defense together almost all season. But their backups are more established and experience than ours. Notice i said experience and not better. While i think Kalulu, Gabbia and to some extend Dalot are more talented than what juve can offer, they are incredibly young and inexperience. Chances are, they will make mistakes.

Praise God. Thank you Jesus. Castellijo next please. Felipe Anderson is available on loan. We don’t need to keep Castellijo til the end of the season.

castilejo is only useful in defensive phase.

This guy looks unhappy to leave . His look on Lazio jersey says it all. I was thinking management will re-evaluate the decision to let him leave after Kjer injury

Farewell Mateo 22.
Your arrival brought a measure of excitement. All in all, things didn’t work out perfectly, but no doubt you did the best you could, considering the changing coaches and all. I don’t know what happened with Pioli, but you were already being made the scapegoat for every error in the backline, some which were Romagnoli’s fault.

Anyway, it’s in the past now. Wishing you all the best in your new challenge. I salute you for that touching farewell message you gave Milan fans. You are a true professional.

amazing job from Maldini-Massara duo. amazing clean up. A bit sad that we missed out on Simakan and Kone, would have made the winter transfer market all the better. Tomori might surprise us, but 27M valuation too much imo, on the bright side we now can choose between Simakan and Milenkovic, the latter will be in his final year, 15-18M should be enough. Krunic and Castillejo will leave in summer putting end to mediocre players at Milan, with Pobega and Thauvin taking their spots for free, basically financing our new CB. just hope we can get Otavio for free.

Chelsea Fans rate Tomori very highly. Better than a lot of their current CBs. I actually caught a glimpse of him playing and he was good. We will see. I am hoping chelsea pulls yet again another chelsea and Tomori becomes the next KDB or Salah.
Chelsea is so impatient, they have a habit now of letting top talent go a bit earlier and regret it later.
One can only hope this is the same case

I’d be happy to see Laxalt back next season as backup for Theo.
Roma, Kjaer, Gabbia and Tomo be a solid CB roster.
Calabria and Kalulu rb.

Of course we can hope for some upgrades, especially at CF, but this looks like an affordable and balanced squad

Agree to Laxalt as back up

No it won’t . He will play against Boligna, all things being equal. If he plays for us next season, then he will miss first match of Coppa Italia.

Interesting to see who will be deployed as AMC next match. I hope Hauge, but the role is as SS not as AM playmaker

It would be interesting to see Hauge there.
Another option could be to play Ibra off Leao, he likes to drop deep anyway and is great at linking up.
Play rebic on the left.

We really do need a new RW, I will be amazed if Maldini does not get us an upgrade there. With the signings we have made, this seems like a big hole in the team.

Why not sell Castillejo and give Marseille some money to let Thauvin go early.
If not, find someone else, Casti is not an option anymore

We have been linked to Douglas Costa today! His pace and skill would be a huge upgrade at RW. If he can stay fit…

His work/defending is not the best but we have salamander for that.
I would imagine Juve would not be so keen on strengthening a direct rival though