Hakan Çalhanoğlu spoke to the press after assisting and scoring and Milan’s 2-0 win over Shamrock Rovers.

Çalhanoğlu has been a key player for Stefano Pioli’s Milan and last night he proved his quality once again with an assist to Zlatan Ibrahimović and then a great goal of his own (assisted by Alexis Saelemaekers), as Milan beat Shamrock Rovers 2-0 in the second preliminary round of the 2020-21 Europa League.

“We started well from the first minute. Now the head is on Monday against Bologna,” Hakan told Sky Italia after the game. “The relationship with Ibra? We have great cohesion, he helps the whole team and not just me. We are a united team. I feel good like this, I feel stronger than last year and the one before. I feel like we’re a team.”

Speaking to MilanTV, the 26-year-old Turkish added: “We’re all happy to have started well, we respect all our opponents and we knew Shamrock Rovers are a good quality team, but we’re just focused on ourselves. We’ve worked really hard and well for 2-3 weeks, we’ve been working really well for a while and we started the match off really well from the first minutes. We scored with Zlatan and then I scored which killed off the match. I’m happy.

“The fact that there are no opponents to underestimate? This was a tough match, it’s always a bit difficult to play against the Irish in Ireland, they are physically imposing but we played well from the first minute and kept it up all 90 minutes.

“Ibra? I hope we continue playing like this, we have great cohesion and I want to thank the team because together we are stronger.” 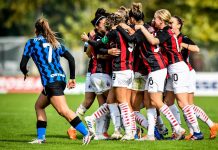 Calha is showing his best at Milan

Fantastic player when he is fit and in shape, it’s very hard to replace him with another player. If he continues like this he will be considered a top class playmaker !

Good to know that he is no longer called Turkish kebab.

Who called him like that, didn’t understand football at all. I remember I thumbed down all those comments. Hakan played almost all of his time in Italy out of his position and sometimes played really good. He had also some personal problems with his wife, but now he is fantastic ! I didn’t understand that dumb coach Giampaolo who played 4-3-1-2, having in the team Hakan, Paqueta and Jack, all of them perfect for that one behind the strikers. He played Suso in that position instead of trying Suso as second striker or selling him. Dumb, dumb, dumb, one of… Read more »

It’s due to respecting the characteristics of the player by dropping him at his natural position and giving him the function he can execute properly.

zlakan combo will light up and tear up serie a, coppa italia and EL this season