Paolo Maldini spoke to Sky Italia after the presentation of Sandro Tonali, saying Milan will continue to try reinforcing.

Milan have signed three players in the mercato so far: Brahim Díaz (presented on Friday), Sandro Tonali (presented today) and Ciprian Tătăruşanu (will be presented to the press tomorrow at 13:15 CEST).

Paolo Maldini is directing the entire mercato from his position as a Technical Director. Today following Tonali’s presentation, he spoke to Sky Italia to answer some questions:

“Sandro was born in 2000, he’s very young and he’s fulfilled his dream. In a world of football that is less and less devoted to sentimentality, this is a beautiful story. His signing was very unusual, it was not possible to even think about it a month ago. We got to this point thanks to the determination of the guy and the work of the agents. Cellino is a person of value and of a word. Thanks also goes to our owners who have changed course and understood that we can do something great.

“The boy’s passion for Milan? It is not very common… players are professionals and they have to evaluate their career prospects. I’d talked to Tonali almost two months ago and told him that it’d be difficult to see him here. Our common hope was to bring him to Milan, ensuring that he does not lose this dream. Then things lined up and we were able to bring him here.

“Chiesa? He is one of the best young Italian players, but there have never been a negotiations with Fiorentina for him. This is the state as of today.

“Other mercato names? The idea is to always improve the team. Right now our priorities are covered. We have some minor injury problems with the central defenders, but since the mercato will be open until October then if there is the possibility – Milan will improve. That said, much of the work had been done even before the mercato started.

“The relationship with the club and Boban? There are common objectives, sometimes the ideas are conflicting but with a common line things are much more natural. The results obtained post-lockdown are evident and the results of the planning that had already started last year. The fact that Boban is not here saddens me, he’s a dear friend of mine, without him we are less strong but we try to reach a common idea.

“Shamrock Rovers? It’s a challenge that scares us a lot, they are a deal that is doing well, they are first in the league and they have already played 13 official matches while we have some problems: Rebić is suspended and Leão is injured. In addition, we play away from home in a single game, we are rightly worried.”

Look, Berlusconi, this is how Milan should be managed, “as a family”, yes you and Galliani are a part of this club’s history, but Maldini should’ve taken a managerial position after he retired. Maldini said once I retired, I never received a call from Berlusconi, he also said on several occasions if Milan calls I’ll go. Milan does not have a captain on the field, not one of the whole team can fulfill that role, but we have Paolo who gives this young squad peace of mind and confidence to keep giving their best on the pitch. That’s how a… Read more »

Yes I agree with u ,if we keep buying one player at a transfer window ,then maybe in 5 years time milan will be back to the pinnacle ,but just buying only tonali and an average Diaz ,Milan’s improvement is just by 3%so we should not expect miracle or anything spectacular from this team

Plz show some respect to berlu and galliani…..what they did for Milan I can bet no owner can do it for their entire life….it was only in final years they blow it up….rear history speaks volume……about maldini he is legend no doubt but plz don’t compare……

The one who destroyed MIlan with free transfers and crappy players was Silvio Berlusconi.

Let’s not get into this argument but let me remind you it was berlu’s millions who saved Milan from bankruptcy and galliani transfer magic which made the devil conquer countless crowns cups etc…..it was not only the golden era of Milan but saachi’s team is still known as best team of the last 40 years or so

Let’s don’t get too over excited ,milan have not made any sinificant change ,in truth and no sentiment tonali can’t bench kessie or benacer, but I know with sentiment and him being italian ,one of the African duo will be relagated and we will see the difference ,Diaz is an average player not Better than castellejo or salaemeker ,and this is the only signing that was done and some of us keep lying to ourselves that milan will compete for the league , pls achieving a 4th place finish may not even happen ,milan need experience first team players to… Read more »

U are not getting the gist ,none is bad ,ibrahimovic ,kjaer, rebic are all good signings that have been in the club my point is this adding an unproven prospect like tonali alone does not give us automatic ticket to top 4,cos to me milan management seem to be contempted with just that singular signing and want to relax,…add experienced trophy hungry players

Trying to copy from the JUVE book of winning are you? wink. Balancing youth and experience like what we’ve been doing for decades. But who can blame you, to be the best you need to learn from the best. Unfortunately for bilan, juventus will always remain the best then, now and forever.

“forza juve 21 hours ago Reply to  JOHN THE BAPTIST While all you bilan fans are arguing whether to have 4 good midfielders OR just 2 starters with 2 subpar replacements to face the long season, we at JUVENTUS have assembled the complete mix in midfield consisting of ARTHUR, BENTANCUR, RABIOT and McKENNIE – young, technical, combative, tenacious – with plans to further strengthen it with a fifth member. When (and not if) AOUAR or LOCATELLI joins to complete the Famous Five, we will be an unstoppable force the likes of europe and the world have never seen. Under Mr… Read more »

My nigger I have never envied juve ,they have wasted so much money buying all they can only to win local trophies ,juve is not a club to emulate and believe me champions league is still far from them

just leave or do we really need to take another dump on you and your club. 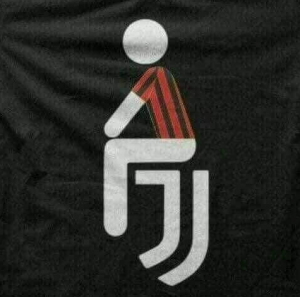 reading your comments make me love milan even more.

You forgot Serie B days? wink.

And you guys only got to the top because we and inter declined during the 2010s. But guess you’re going back to Europa soon and sadly La Merdas still wont win an international trophy.