The Rossoneri’s new third PUMA kit has been officially unveiled, see what the Milan players will be wearing next year.

After unveiling the home kit at the end of last month and beating Cagliari 3-0 while wearing it, today Milan unveiled their third kit for the 2020-21 campaign.

“Sports company PUMA and Milan have today unveiled the new Milan Third Kit to be worn by the men’s, women’s and youth teams for the 2020/21 season. The Third Kit is inspired by the trailblazing designs of Milan’s Alta Moda.

“Milan is the fashion capital of Italy and is regarded as one of the fashion capitals of the world – a symbol of luxury, sophistication and quality. Milan is rich with culture, a truly cosmopolitan city with style at the core of the city’s DNA. To celebrate Milanese and Italian high-end fashion PUMA have created a unique Milan Third Kit by integrating a pattern synonymous with tailoring; the iconic Houndstooth pattern into the jersey’s design.

“The Houndstooth pattern is characterized by an almost checked appearance, made up of a repeating geometric block. The pattern originated in Scotland and traditionally utilizes dark and light alternating checks. The pattern quickly became a staple pattern in wool suiting and outwear and became a pattern frequently utilized in Italian high-end fashion. To include a Milan specific detail, PUMA have rotated the original Houndstooth pattern 45 degrees to showcase the “M” in the patterns design.

“David Bremond, Head of Product Line Management Teamsport at PUMA said: ‘The Milan Third Kit is a continuation of our crafted by culture theme. We looked at how the city and the culture of Milan influence the world. Milan being the capital of fashion made it a logical choice to take our inspiration from such a strong cultural influence. This is the reason why we wanted to bring to life a classic pattern to celebrate the city’s culture through the lens of fashion. Never before have Milan had a kit using this fashionable colour palette and for the first time ever, we have integrated an Alta Moda pattern into an Milan jersey.’

“Casper Stylsvig, Chief Revenue Officer of Milan said: ‘Milan is a hub of elegance. Whether it be architecture, design, art, or fashion, there are very few that could compete with the city. Playing on the architectural brilliance of Milan for the Home Kit, we wanted to source inspiration from the fashion capital for our Third Kit this season, as a huge part of the city’s global identity. The result was a decidedly innovative shirt that immediately met our taste and a colourway that will not only appeal to our Milan fan base but to the masses. A beautiful, rich product that showcases the beauty of the Milanese lifestyle and culture to an international audience.’

“The new Milan Third Jersey is a rich teal colour with the Houndstooth pattern printed tone on tone onto the bottom half of the jersey, complimented by teal shorts and socks to finish off the look.”

“The new jersey is equipped with PUMA’s thermoregulation technology which provides an improved moisture management system to maintain the perfect body temperature. Combined with laser-cut perforation on the front and engineered jacquard at the back, the jersey offers the latest in fit and mobility for optimal performance.” 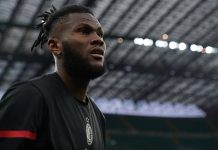 Kessié: “I want to stay forever and the fans have to be calm about my renewal, after the Olympics we’ll fix everything”

They call us ” Red and black” That’s our identity. We should try not to dilute it shortsighted economic interest .

i know we have played in light blue before but there should be somekind of a rule set incorporated in the club that we NEVER play in blue. The way to go must be red-black striped, white-red and entirely black as a third shirt atleast that is how i view it but guess the designers never heard of our rivalry. Yeah i know im a grumpy ol bastard but blue really never should be part of milans shirts,

Yeah its an odd choice to say the least but not only that it will propably not sell very well for a third kit so from a buisness point of view its propably also a bad choice.

Finally! I can post! *****ATTENTION ADMIN***** I don’t know if it’s cause I’m on mobile writing this, BUT this new format when I go to write something there’s no ‘post comment’ button. Anybody else having this problem?

Im using a pc so cant really say if its related to writing on phones but i know previously there has been problems in regard of posting on this blog and deleting cookies sorted out the problem. Hope its of some help if others are having the same issue.

I often have that problem on Android. Usually, it get fix after a reload or two. You can also use the option to display the website as PC in your mobile browser

Thanks guys for the input!

nice jersey they are looking astonishing

I think it’s not a good deal if Milan agree with 7,5 M Ibra asked. He is not the most valuable factor in the team. Duo Benassie, choice of formation, and Kjaer have been the key success factors. No other big team would accept him if Milan reject. He still has ambition to be a UCL winner. He can have that chance in two season with Milan and only Milan who are willing to put him as the center of the team play. No other big team would do that. 5 M is the top with goal bonus and top… Read more »

I agree. We are handicapping Milan by making Ibra our focal point. We don’t even have a direct replacement in case he gets hurt. The management on the team is trash and why I wanted ragnik. He would ensure better players and develop talent

OFFICIAL STATEMENT: RICARDO RODRÍGUEZAC Milan announces that Ricardo Iván Rodríguez Araya has joined Torino FC on a permanent deal.
The Rossoneri Club wishes him all the best in his future endeavours.

So ralf Rangnick finally opened up regarding his move to Milan and his vision…..well he certainly have made some interesting points in there

Kessié: “I want to stay forever and the fans have to be calm about my renewal, after the Olympics...