Matteo Pessina is a profile Milan are considering and today they had a meeting with his agent.

Milan are working on strengthening the squad of Stefano Pioli ahead of next season and today the management of the Diavolo had a meeting with agent Giuseppe Riso.

As reported by Milannews.it’s Thomas Rolfi, the player Milan and Riso discussed the most was Matteo Pessina.

Pessina grew up in the Rossoneri Youth Sector and he moved to Atalanta as part of the deal to bring Andrea Conti to Milan in the summer of 2017. The 23-year-old spent the last season on loan at Hellas Verona, where he scored 7 goals in 35 appearances, playing a 3-4-2-1 in the trequartista role.

Pessina is owned by Atalanta but Milan, at the time of the Conti deal, secured 50% of a future sale of the player. This means that if the Diavolo choose to buy Pessina, he’d only cost half of what Atalanta value him at. Matteo could be a low-cost replacement for Giacomo Bonaventura, who leaves the Rossoneri with an expiring contract, acting as a replacement for Hakan Çalhanoğlu.

The player is currently out of action after suffering an injury in Hellas’ game against Genoa last night. He should be back on the pitch in a month’s time. 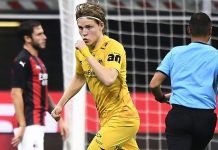 This is good news. Pessina will be needed since Paquetá will most likely be sold and Bonaventura will leave.

I’m disappointed with the news that we are linked to Surge Aurier. Denzel Dumfries should be our first choice option with Emerson Royal the backup option if we can’t close the deal on Dumfries.

What experience does pessina has to replace bonaventura, we need few experience players not besides he’s not more better than brescianini who can also play a similar position. Milan shouldn’t make mistakes again

I think Pessina’s addition is a good choice since he has shown his quality, wants a return and he costs only 6-7M for us. Bonaventura leaving is a big mistake. Leao, Rebic, Bona, Pessina, Chalha, Saelemaekers + some RW (Chiesa fingers crossed), this is the attack behind Ibra I want to see for next season.