The Rossoneri’s new PUMA kit has been officially unveiled, see what the Milan players will be wearing next season.

Milan and PUMA continue together for another year and next season’s home kit was unveiled on Monday. The Rossoneri will be wearing it against Cagliari at Stadio San Siro on August 1st, the last Matchday of the surreal 2019/20 season.

“Sports company PUMA has today unveiled the new Milan Home kit to be worn by the men’s, women’s and youth teams for the 2020/21 season. The Home kit is inspired by the elegance and grandeur of the city of Milan, its magnificent structures and its iconic architecture.

“Milan is a city rich with culture and history; it is a city of glamour and creativity, home to some of the world’s most beautiful and historic architecture. To celebrate the essence and culture of the city, the new Home kit pays homage to Milano tradition and its contemporary design.

“The Galleria Vittorio Emanuele II is at the heart of the city, it offers a glimpse into the Milanese soul, complementing the city’s past with a modern approach to design. The Galleria is Italy’s oldest shopping mall, housed in a four-story double arcade in the center of Milan and is named in honor of the first King of Italy. The striking patterns and architecture of the Galleria have inspired the all-over pattern printed tone on tone within the jersey’s traditional black and red striped design, adding a modern twist to an iconic design.

“David Bremond, Head of Product Line Management Teamsport said, ‘Milan is more than a football club; it represents the culture of the city. We wanted to create a jersey that respects the traditions of the club and speaks to the fans inside and outside of Italy. We have incorporated the iconic architecture of Milan into this jersey, to truly represent not only the city but the culture that influences it.’

“Casper Stylsvig, Chief Revenue Officer of Milan, said, ‘The Milan jersey is symbolic, representing the pride and belonging of millions of fans around the world. The new design pays homage to tradition, culture and iconic architecture which is synonymous with our beautiful city of Milan. Milan is built on innovation, community, integrity and inclusiveness and PUMA have effectively captured these core values within this elegant new design.’

“The new Home jersey will make its on-pitch debut on the 1st August against Cagliari in the final Home game of the Serie A season.” 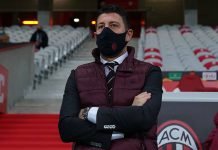 Bonera: “We are a bit disappointed with the result but very pleased with our performance, the spirit will always be the same – with... 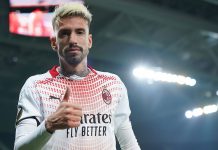 Castillejo: “Apart from my goal I’m very happy to return to playing without any pain, I’m recovering and feel good” 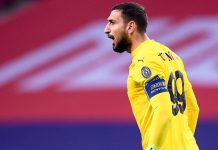 Donnarumma: “We could have won but we conceded an avoidable goal, wearing the Captain’s armband? It’s a pride”

From the looks of it i quite like this new shirt of ours and infact i’ll go as far as saying its one of the better home shirts in the past couple of decades, that is if we look strictly on designs and not with nostalgic feeling because we won something with other shirts. I absolutely hated the thin lined shirts as milan in my view allways should play with the thicker stripes as we did in the 80ies and 90ies. I also like the galleria pattern incorporated in the shirt design which sorta reminds me of my old netherlands… Read more »

Bonera: “We are a bit disappointed with the result but very pleased with our performance, the spirit will always...

Tonali: “Playing vertical passes is what the coach wants from me, after conceding the goal we struggled a bit”

Castillejo: “Apart from my goal I’m very happy to return to playing without any pain, I’m recovering and feel...

Donnarumma: “We could have won but we conceded an avoidable goal, wearing the Captain’s armband? It’s a pride”