Mattia Caldara has returned to Atalanta, after two years at Milan in which he never played in Serie A.

Caldara arrived to Milan in the summer of 2018 in a direct exchange with Leonardo Bonucci. However, his career with the Rossoneri never took off as he suffered two unfortunate long-term injuries.

Today, Mattia made his return to Atalanta, where he was the Captain before going to Juve and then immediately to Milan.

“Milan announces the agreement for the player Mattia Caldara to join Atalanta on a 18-month loan deal with right to buy. Milan wishes Mattia the best of luck in his future sporting career,” a statement on the website of the Diavolo reads. Contrary to some reports, there is no buy-back clause.

Caldara played just twice for Milan, never in Serie A. He wrote on his Instagram account today: “Thanks Milan, thanks no matter how. But it was time to go home.” 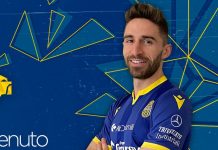 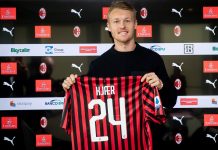 Official: Kjær joins Milan on a six-month loan deal with an option to buy 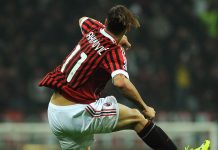 Official: Ibrahimović returns to Milan on a six-month deal with an option to renew for another season

Connect with
I allow to create an account
When you login first time using a Social Login button, we collect your account public profile information shared by Social Login provider, based on your privacy settings. We also get your email address to automatically create an account for you in our website. Once your account is created, you'll be logged-in to this account.
DisagreeAgree
5
1
0
6

Disappointed but clearly Caldara wanted to leave. Can’t say I blame him though.

Milan will not continue with Pioli next season so I don’t see the point in Milan doing any revolution to the squad in the winter transfer.

Especially given that Pioli just now after 10 games decided to use a different formation and drop underperforming players like Suso and Çalhanoğlu.

Selling Piatek, Paquetá and Kessie in January would be a disaster.

We need a proper defender to partner Romagnoili. I hoped it would be Caldara because Mussa isn’t up to it.
I guess we’ll have to get another in.
Also we need another striker. Ibra is 38 and may not be able to play every game effectively.

lol look at this asshole showing off ucl badge on atalanta jersey as if he has anything to do with it. i bet he wouldnt claim that atalanta’s his home if the club was in worse shape than milan. screw u opportunistic coward.
now get milan boateng and we’re even maldini. no, not THAT boa boa boa teng teng teng. his brother

Maldini , the best defender ever , does recognize defenders better than all of us combined. If he decided to sell Caldara , it must be for a reason. Now i can tell , the reason is him being an asshole ! Did it when he moved feom Juve showing the 7UCL on our shirt , then he does this to us. He got no respect for any shirt he holds. He also talked some shit like he is happy that he will play UCL , ” something that sounded like a dream before “… don’t know if he meant… Read more »

Good. Obviously they are lowering the bills. Hopefully this is due to a clear plan in the near future, and not due to moment panicks like it has been so far (or incompetence…meh). We say “expensive shoes are cheaper because last intact through the whole winter”. So better sell 3 players and get a good one, than bring whoever is on the market.

I don’t understand why he never be given a chance after recovery. Dumb coach

Pioli: “Milan need to make the most of this moment, having Ibrahimović is manna from heaven, I believe in...