Giacomo Bonaventura has spoken to MilanTV ahead of the Bologna game on Sunday evening away from home.

Jack played from the start in the draw against Napoli and in the win over Parma and he’s expected to be in midfield once again on Sunday when the Diavolo take on Siniša Mihajlović’s Bologna.

Ahead of the encounter at Stadio Renato Dall’Ara, the 30-year-old gave an interview to MilanTV (in addition to his interview with Sky Italia which you can read here):

Parma was another great performance…
“Yes, we could say that but Theo deserves the credit, he did well in going for that loose ball but we built the whole action well and I managed to shoot and I’m happy we managed to score.”

Your goal against Napoli was our goal of the month!
“I thank everyone who voted for my goal. I hope I can keep it up and score more goals. Especially if they are important for the team. Scoring against Napoli was important because we were training and managed to equalize. Napoli is a great team so… I was pretty tense before the match because I knew it would be tough. On top of that, it was my first start at San Siro in a long time. It was an incredibly liberating moment for me and I’m happy the fans appreciated my contribution to that game.”

How do you get on with Pioli?
“A lot, because I firmly believe in what he is doing as does the entire squad. I can sense that all the guys are happy with the coach’s work, what he has us do. He is always pushing us to give and do more, he is very demanding, so we need to dig deep, it can be quite tough but we are determined to do well and we believe in what the coach is having us do, so I think that from here on out the team will continue to improve.”

How important is it to build group cohesion?
“It certainly helps, but I think our field rapport is more important. Games are won on the field and you need to be prepared: mentally, physically and tactically; to be in form. There are other aspects, like that one, which can help because they develop your relationship with teammates when you spend together off the field, we understand each other better, which helps and is good for the team, but what happens on the field is the most important thing.”

Next up, Bologna. What do you expect?
“We need to build on what we did against Parma, playing against Bologna is certainly going to be tough because Bologna is a team that plays well and has some good players. We’re aware that all games are difficult and we need to work hard and play well but most of all we need to prepare for the game well because you build a win during the week. When you prepare well during the week, you win on Sunday.”

Seeing Mihajlović again…
“We’ve got wonderful memories of his time here, he had managed to create something fantastic, and he created a great atmosphere and environment at the club which put us in a position to play well. He was certainly a coach with great character and determination but in dealing with the players he showed he had a great heart, too. It was clear he’d always give everything for his players and always did his best to get the most out of his players. He might only have spent a season here but he taught us a lot. Tactically, we did some great work, I learned a lot from him. I have great memories of him and hope he can keep on fighting and win his battle [against leukemia].”

Are you hoping for an Italy call-up?
“Hopefully. For sure, a year ago I was playing through the pain in my knee and I believe that stopped me from playing to my fullest. Despite that, I’d played very well and had been called up to the national team, so I believe that if I work with determination and passion, the results will come and you can achieve what you deserve. At Milan, and perhaps with the national team.”

Can we be hopeful about Caldara?
“Mattia will certainly return to the levels he’d shown at Atalanta and in his few games here. However, these things take time, like when I underwent surgery, the doctor said I’d take time. The body needs time to re-adapt to the workload and rebuild its strength. You need to be patient. However, periods like this, in which you aren’t playing or you’re struggling to recover, help you become stronger mentally.”

Describe Theo Hernández…
“Theo is a player with impressive physical strength and he’s very gifted technically. So, the future is his.” 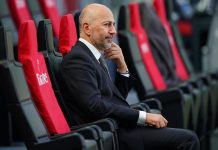 Gazidis: “People are once again proud to be Milan fans, sometimes unpopular decisions are needed, our strength? I give credit to Pioli’s leadership”