Rossoneri Blog – AC Milan News
Home News Interviews Krunić: “A win would have helped us a lot but Milan are...

Rade Krunić believes Milan are heading in the right direction after drawing Napoli 1-1 at San Siro.

Krunić played the full game as the Diavolo played a tie against Carlo Ancelotti’s Napoli at San Siro on Saturday evening.

Hirving Lozano (24′) and Giacomo Bonaventura (29′) scored the goals tonight, eventually points were shared and Milan failed to improve their hideous position in the Serie A standings.

“Today was not easy, Napoli is a great team,” Krunić told Sky. “We were good, especially in the first half where we did very well. It was a difficult game, it mattered a lot. A point is better than nothing, a win would have helped us a lot but we’re on the right track and we have to continue like this.

“The moment? We met very strong opponents. I hope to continue along this path as well, I have the confidence on the coach. I hope that we can start making points soon. Why was I benched initially? I don’t know, at the beginning I was not well physically, I had an injury. Now I hope I can play games with great continuity.”

Speaking in the mixed-zone, he said: “Scoring few goals? Only luck is missing. In the first half we played a great game, for me the best first half of the season. It’s a shame we didn’t more chances, we could have scored at least one more goal. You’d think it was just bad luck that was to blame.

“We did well against Lazio and Juventus, only the result was missing. Today we got a point, it gives us confidence and we’ve seen that we can play against anyone. We’re on the right track and we need to continue like this.

“The standings? We see it every day, it’s hung everywhere in Milanello, we know what the situation us. It’s not easy for the fans and also for us, we hope to start again to change this league position.”

Krunić also had an interview with MilanTV: “We clinched a point which boosts our morale for the next games. We have to prepare well for the upcoming matches that are crucial because we need to gain more points.

“My moment? I can achieve much more, and I can now say that I’m fully fit. Surely, I can still improve including my teammates. We will achieve this in time if we get some good results so that I and my teammates can further improve. I believe we should expect a better Milan from now on.

“The fans? Our fans surely give us the verve to battle on, when we hear them cheer us on in difficult moments. I gain energy when hearing their chants and we want to thank them for this. I can’t really ask much of them because we could have done better in graining more points before now. Our fans deserve better results and a higher positive in the standings but I kindly ask them to be a little bit more patient for a stronger Milan.” 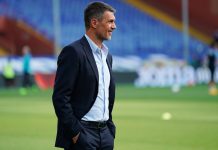 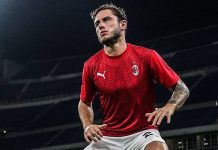 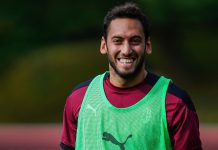