Rossoneri Blog – AC Milan News
Home The Match Conti and Leão expected to keep their places in the starting XI...

Stefano Pioli is going to use tomorrow the same XI that started against Lecce.

The Rossoneri face Roma at Stadio Olimpico tomorrow at 18:00 CET and coach Pioli is expected to keep his faith in the 11 that started against Lecce.

As reported by Milannews.it, Andrea Conti will start on the right-hand side of the defense. Davide Calabria is back from his suspension, but Pioli is reportedly going to play Conti, who gave away a penalty against Lecce with a rather avoidable handball.

Lucas Biglia is still preferred over Ismaël Bennacer and he’ll work with Franck Kessié and Lucas Paquetá in midfield. It remains to be seen whether Kessié will again play on the left, allowing Theo Hernández to push through the left, like he did last week.

In attack, Rafael Leão is expected to once again be preferred over Krzysztof Piątek. The Polish striker was on target against Lecce, but Pioli seems to believe Leão’s characteristics as a central forward make him a better fit for the game. Leão missed a few excellent goal-scoring chances against Lecce, but overall – especially in the first half – he had a positive impact on the Milan attack.

Suso, despite not playing to his level this season, will keep his spot on the left, while Hakan Çalhanoğlu will hope to reproduce on Sunday evening the performance he had against Lecce. 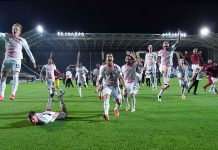 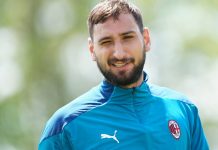 Forza Milan! Doesn’t matter who start or who does not. As long as we are on path to CL qualification we are good. And those who are bashing last week’s result, needs to see Lecce drew with Juve today, a feat that our beloved Milan haven’t been able to achieve last season home or away.

Pioli’s experience is handy read through all his comments
But Milan need a solid rb as continue is good in a 3 man defence and Calabria is inconsistent we should have signed bakayoko as biglia is easily bullied even niangoloan would be OK, pls we need to be weary of pastore outside shots co’s biglia won’t cover our defense and I want to see how leao will play against the likes of smalling and fazio
We have a better bench but perrioti is very dangerous with overlapping continue
Forza milan

Nice lineup but Biglia is my problem. He gave away the ball away needlessly which resulted in the winning