Daniele Massaro has spoken about his goals in the Derby della Madonnina and shared some of his game rituals.

Rossoneri legend Massaro has spoken to MilanTV ahead of the Derby della Madonnina, which takes place on Saturday at Stadio San Siro (20:45 CEST kickoff).

“What is it like to play and experience a Derby? It’s always great to play against the second team of Milano [laughs]; come on, I’m a Milan fan so please allow me to say it…” he said.

“You have to earn playing the derby a week before. You also have to earn a place in the starting XI during training, and be lucky enough to play this game without feeling the pressure when you step onto the pitch because it’s an amazing atmosphere. Back then a win was worth two points, while now it’s three. Winning the derby is truly unique.

“The derby that I remember the most? I scored quite a few goals in the Milano Derby. I remember the last two I played took place during the Easter period, and scoring was a pleasant Easter egg surprise. I gladly recall the 2-1 win in 1994 because I came on as a sub. I was distracted and Salvatore Schillaci equalized in the 86th minute. Obviously, Inter fans were happy to have equalized with just four minutes to go. But, I didn’t want it to end that way, I wanted to make up for my mistake.

🗣 "You have to earn your place in the derby match. And win it". Signed, Daniele Massaro 🔥

“In the 92nd minute, I received the ball from a teammate, I controlled the ball and used my left foot to blast it in. I scored many goals using my weak foot, and I placed it into the far corner beyond Walter Zenga’s reach. He’s a beautiful anecdote: the day before the game, on the newspaper, Giuseppe Bergomi, who was Inter’s captain back then, said he wanted to win in the 92nd minute with an own goal by Franco Baresi. The opposite happened though, we won 2-1 thanks to a slight deflection by Bergomi.

“My relationship with the fans? I’ve always been a Rossonero, since I was a kid. I was lucky enough to watch my favorite team from the stands and also had the honor to play for my childhood team. So, I feel like I am one of them. Probably my best derby moment was some years before when I scored the goal for 1-0 in the 86th minute right in front of the Curva Sud.

“Pre-derby rituals and superstitions? Well, I had a different superstitious routine for each game, I always did something different: for example, always wearing my right shoe first, stepping onto the pitch with my shoelaces united before knotting them. And some dressing room routines: I always sat on the right side of my captain, Baresi; I never changed seat.” 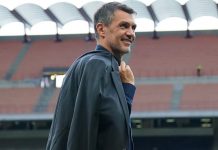