Franck Kessié has stated he was never asked to leave and claimed ‘we need to understand what Giampaolo asks to play the best’ after Milan’s win.

The Rossoneri defeated Brescia 1-0 on Saturday and got their first win of the season. Kessié was chosen ahead of Fabio Borini to start in midfield and played his part in the victory of the Diavolo.

“The important thing was to win and that’s it,” he told MilanTV. “It’s normal that the games go like this. We played well in the first half, in the second we descended. The league has just started and physically we are a bit low. I arrived later than the others but I’m working hard to recover.

“Giampaolo’s requests? It’s a different job, I used to play 4-3-3 and now 4-3-2-1. We need to understand what he’s asking of us and do it. The growth of Milan? It’s a good group, we must work together to achieve our objectives. The away trip to Verona? First there is the international break. We go to the national teams to play and when we return we’ll think of Verona.”

Speaking in the mixed zone, Kessié said: “Our league started against Udinese but today it was fundamental to win, which is what we did. My future? The squad never told me to leave, they just asked me to stay. I’m very well here, I still want to give my contribution. This year there are many players in this role, also because of the last signings and there’s a coach who plays with a new formation. We need to understand what he asks to play the best.”

Ibrahimović: “I’m not a mascot, if this is the situation then it’s difficult to see me here next year, Zlatan isn’t a Europa League... 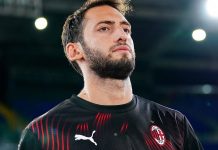 Çalhanoğlu: “I love Milan but we’ll see what happens in the future, Ibra is a lion and is our leader, Pioli motivates us every...

agree bro.
and milan need to be more ruthless in attacking like Ben Nasser said.
imo, the best solution is hire Marco van Basten to train our attacantes.
Kessie and the other midfirlders could learn from MvB how to improve their shooting skills

The Big Dog
Reply to  Agustinar

Needs to improve on almost everything but strengt and stamina

Bennacer is better than Biglia. Quick, smart passing and helps the defense

We should sell him if we get a good offer over 40 millions and buy a more technical midfielder. Otherwise, I would take him over Lord Borini and Lord pretty hair any day of the week.

Gianpaolo should make him dribble and shoot 20 times in the training for each ball he shoots to the stands each game. He’s decent at passing too, just needs to pass that final ball instead of shooting. Seedorf also had some wild shots, but he passed pretty well in the final third too, and also at least made some of those wild shots.