Rossoneri Blog – AC Milan News
Home News Interviews Borini: “Each player needs to be doing his part for the team,...

Fabio Borini has stated Milan are ‘having more fun with the ball’ now and said all the players need to be on the same page in order to play Giampaolo’s football.

Borini was introduced against Feronikeli on half time and got on the scoresheet in the 57′ minute, as he was at the end of a Rafael Leão cross to beat Florian Smakiqi.

Borini seems to have adapted well to his new role as a mezz’ala and has shown he can be a quality back-up for Marco Giampaolo in the upcoming season.

“This is still the pre-season, so we need to keep working hard, working hard to improve with every game,” Borini told MilanTV at the end of the 2-0 win. “That’s what we’re trying to do. This trip wasn’t easy, we arrived earlier on Saturday and that made things harder for us. However, we got a fantastic, warm welcome from the fans here in Kosovo, so we’re happy to have visited.

“The new signings? The sooner we all start playing from the same score, the easier things will become. The coach’s football is all-inclusive, each player needs to be doing his part for the team, as we’ve seen during pre-season. We all need to be rowing together as soon as possible because the season is starting.

“We have fun while playing? We’re having more fun with the ball, when you have a greater share of possession and quality players like the technically-gifted ones we have, we have more fun. But we still need players who do the graft, like myself and Lucas, and so on. We need a good balance of players in our squad. Obviously, when you’re having fun you feel less fatigue.” 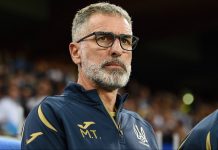 I cringed when they gave him the captain’s armband. Like WTF?

Bruno Fernandez is perfect 14 assists this what the team needs for so long.
No midfielder 33 games 3 assists

If Milan sells Conti, we should buy Youcef Atal from Nice fc. Guys how do you see that.

We need Youcef Atal in our back line.