Theo Hernández’s pre-season is over due to the blow he suffered against Bayern Munich, as the club confirmed he has a capsule-ligament injury.

The new summer signing was Milan’s best player in the friendly against Bayern Munich but had to leave the pitch before the end of the first half due to an injury.

The player returned to Italy to undergo medical tests and on Saturday the club released an update regarding his situation:

“Today, Milan defender Theo Hernández underwent a scan to his right ankle following the injury suffered during the match against FC Bayern in the ICC tournament. The examinations have revealed a capsule-ligament injury. The player will undergo more tests in two weeks’ time,” a statement reads.

Sky reports that it will take Theo over 3-4 weeks to recover as his injury is more serious than initially thought. The Serie A season starts on August 24 so the player is unlikely to be fit in time. 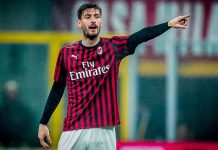 Gabbia: “My objective is to always give my all for Milan, I hope to play against Fiorentina, Romagnoli is a Champion” 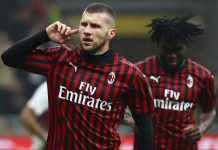 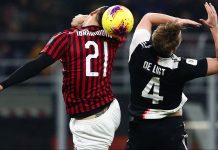 Connect with
I allow to create an account
When you login first time using a Social Login button, we collect your account public profile information shared by Social Login provider, based on your privacy settings. We also get your email address to automatically create an account for you in our website. Once your account is created, you'll be logged-in to this account.
DisagreeAgree
4
10
0
9

Another new signing, another injury . At least its consistent! Never known a club with such bad luck, wishing u a speedy recovery theo u will be top class this season.

Bad luck? How about a curse?

@ big dog, I really don’t know the problem with you. Are you an inter fan here to troll or that you are such a kid

O’Gabb’s dont say you never felt we was cursed in regard of inuries or for that matter the last 10 years i certainly have and im no troll.

what do you mean??

Well maybe i could have reprhrased myself differently but with the ammount of injuries we have had for many years or for that matter how the club has dropped in quality for the last ten years you cant really blame anyone for having the thought we was cursed as im pretty sure the notion has struck many milanistas over those years. Dont get me wrong i dont believe in curses but it has been an uphill battle for the last decade with neverending obstacles on the road.

@Bernard I absolutely agree. We may blame the players all we want but injuries have been their number one challenge. Remember Bertolacci on fire for Genoa. He joined us for 20m. He got injured immediately and never looked like his old self. Same thing happened to Musacchio, Strinic, Silva, Biglia, Caldara, Conti and now Hernández. Not to mention whenever Calabria is breaking into world class form, injury always hamper him. Milan out to investigate the issue. The very best players never look the same after recovery. They are being wasted by injuries.

@Martin Let people keep wandering in self delusion which does Milan no good. It takes a real Milanista to be so critical and not rule out even the supernatural. Lol. The Devil is cursed. I find it no coincidence that the very great players in form who could have seriously improved the team when they joined Milan are Silva, Strinic, Musacchio, Caldara, Conti, Biglia and now Hernandez. And the players don’t remain the same after recovery. Sadly the average players are never injured. And the players on fire always get injured like Jack, Calabria, who is world class but still… Read more »

As long as I’m concerned.. Strinic should just go to Norwich city

I hate this. Always injury problem on the wrong time

Such a deja vu