Mateo Musacchio said Giampaolo ‘takes care of all the details’ and claimed ‘I have the same desire as on the 1st day’.

Musacchio did not take part in Milan’s first International Champions Cup against Bayern Munich (1-0 defeat) due to some minor neck pain, but he should be available for selection against Benfica on Sunday (21:00 CEST kickoff).

Last night, Milan’s new 2019/20 away kit was presented in Boston and Lucas Biglia, Fabio Borini, Hakan Çalhanoğlu, Krzysztof Piątek, Pepe Reina and Musacchio were the representatives of the Rossoneri in the event. The Spanish center back spoke to La Gazzetta dello Sport then:

“I’d love to win a trophy with the white jersey, which is synonymous with triumphs. Although in the end what really matters is the badge that is on those colors,” he said. “I have the same desire as on the first day in which I arrived. I’m happy at Milan.

“Giampaolo? The coach is someone who works a lot, he takes care of all the details and he has a very clear idea of the game, with great attention also to the defensive phase. Last season was a good season all in all, but in this one we want to do better. The way we’re working, I think Milan can be the beautiful surprise of the season.” 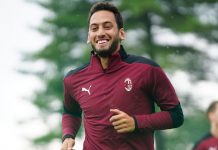 He hasnt adapted as well as we like, his too inconsistent to be a starter and to be a suitable partner for Romangoli. I genuinely think if 15-20m offer comes in we should sell him. Caldara will surely return stronger than ever and he is someone who can become a reliable partner for romangoli both at club and national level. i would like to see Gabbia remain for depth since we no longer have simic. Lepzeig’s umpencano would be a great signing, he will be expensive but with him and caldara we will be set for many years. Calhanglou can… Read more »

Milan till I Die
Reply to  Ash

So you prefer otamendi to musacchio. Why not go and open your own football club,so we can see how it pans out, instead of talking childish things all the time.

Ash
Reply to  Milan till I Die

i didnt say i preferred otamendi, i said Maldini and Boban intend to bring experience CB. they were looking at Lovren who is 30 years old with high wages, based on that logic the other alternatives are otamendi and alderweilde. Demirel is not worth 40m, not when juve signed him for 18m and wants to instantly double their profit. Kabac was great value at 12m but went to schalke. It is not childish what i said, if you understand world of business you will understand it is always best to sign proven players with expiring contracts, this is what Juve… Read more »

just give him chance…Forzamilan guys