Gabriel has left Milan to get some minutes at Empoli in Serie B.

Gabriel has been at Milan since 2012 but never really managed to win a place in the starting XI of the Rossoneri.

This season he started as the 4th-choice goalkeeper and was usually not called-up for matches, but after Marco Storari’s injury, he received a ‘promotion’ and watched his teammates from the bench. Now, he leaves on loan for the 4th time.

“Empoli FC announces that it has acquired on a temporary basis until June 30, 2018, the rights to the sporting performances of the player Gabriel Vasconcelos Ferreira from Milan,” the club from Tuscany, which is currently 3rd in Serie B, announced on their official Twitter account.

The contract of the 25-year-old, who even played for his national team Brazil once, expires in 2019. It’s hard to believe that he has a future in the club, but he’ll try to revive his career with Empoli. 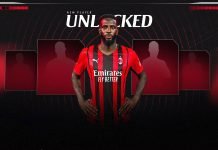 Is he that bad? I just cant imagine he is not as good as than Donna Sr. (or maybe we underestimated the later so much).

He should have done this a long time ago.

‘Next year the third option for the Gk place will be Plizzari ! Next season, our Gks will be Plizarri and Donna brothers !