Rossoneri Blog – AC Milan News
Home News Interviews il Barone: “Us fans deserve to have such enthusiasm after years of...

Giancarlo Capelli, one of the leaders of the Curva Sud, hopes for more signings and is pleased with the level of enthusiasm the fans have.

About 5000 fans, led by the Curva Sud, were at the Diavolo training center Milanello yesterday for the first day of training, showing their support to the new management and the old & new players.

“The enthusiasm at Milanello? It was great to see so euphoria yesterday: boys, children, whole families, already present from the morning,” il Barone told Milannews.it today. “It’s been years since we saw such euphoria, we hope there will also be euphoria in the stands. We hope that there will be another purchase, Montella said that the team is not yet complete. We are pleased that there is enthusiasm because us Milanisti fans deserve it after years of sacrifices and disappointments.

“The new leadership? It’s important to be serious and be professional at work. They give the impression that there’s desire for revenge that the Rossoneri people, who in recent years have had to suffer so much anguish want. The important thing is to create a great Milan. Season tickets? The prices should remain unchanged and this is an honor for this leadership.

“Gianluigi Donnarumma [who will renew soon]? We evaluate things, we look forward to seeing how things are going to end. We’ll decide as fans how to act with him. The position of De Sciglio to leave the club? I was hoping that he’d become the future captain of Milan – I still do. I’m sorry that he doesn’t want to stay at Milan. If someone doesn’t believe in [Milan] then it’s better he goes away.”

Milan’s first pre-season friendly is on the 11th of July against Swiss side Lugano. The first competitive match is a Europa League third round qualification encounter on the 27th of July.

Theo Hernández: “We have to play to win the Scudetto, I went it trying to do my best, Bennacer’s pass as good as a... 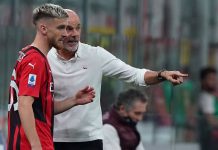 Hell yeah we deserve it. Our time has finally come.

You could also analyze that the Curva Sud showing up on the first Pre-Season training was like welcoming the new Milan and the era that is about to begin. Essentially chasing away that gloomy Milan and welcoming a new regenerated Milan. It’s time to rebuild guys, and that’s the fun part! FORZA MILAN!

And lots and lots of merchandise. From jerseys, barners, bands etc..

With the present situations you can boldly say you are a fan of Milan without any ridicule.

The best time to boldly declare ur milanista is when milan are down, that way u’d know ur not one of those gloryhunters

Me too, bt I never stopped believing
is there a group for Milan fans Nigeria on whatsapp to get news and communicate with other Rossoneri fan

My is worst in Nigeria delter state and sapele local government to be price people usually mock me but now I can speak nd Bragg before them. Fuza Milan. Obinna plz let me have ur number so that we can be communicating on whtsapp. All Nigeria Milan fan and all over the world thus is my whtsapp number. 0706121413

Indonesian’s here, I lost count on the insults. Ppl calling me retirement home fans, lord bonera descendants, matri’s cult leader, or asking whether milan will buy some old washed out player with contracts running out. Rofl.

But not this mercato my brothers! We will rise!

Well tbh I’m a bit worried though lol, so many signings, hope they can adapt real fast.

Ahhh! Here in Nigeria too. The Arsenal fans are the worst. Always taunting me about being a milan fan. The fans that don’t disturb me a Liverpool and Madrid fans. The rest argh. But thank God. We can say this is a stepping stone. I agree abit with Boban that not excellent players but they are good players with room to grow to be greater than excellent. As for Donnaruma, I hope he’s young and has time ahead of him. Let him calm down he’s here because of Milan, Milan is here because of previous good patient goal keepers. He’s… Read more »

Please lets go out there and support this new management in whatever way we can… We are milan… Not the players… Not the staffs… We the fans are milan…. Buy your season tickets if you can…. Or original merchandise e.g milan jersey…. Support them please m… Go to san siro and put fear in our opponents #wearemila

Your Good marketer my friend!
You know how to tell a story!!

Not in the free market guys, get the real one online with addidas ,
For us who can not go the stadium

Yes i have played my part. Both home n away kit as soon as it was available on AC Milan website. For asian, it is advisable to get the S size. Delivery just took 2 to 3 working days and I live in South East Asia.

Man we really do deserve it, after years of being laughed at the diavolo are back to bring the days all teams including real would hate to face! We never stopped believing! Forza Milan!

I too will buy original Milan shirt online, not sure which players shirt though. Feels good to be spoilt for choices.

Aubamayang shirt number 7 that would be sold out for sure

Hahaha.. funny guys.
I like this.
Yes we all have to support the team. Not just by staying behind our tv set.
We have to come out and be active by buying tickets and Jerseys..

Buying jerseys is nice and all but how about saving money to go on pilgrimage to holy casa milan and san siro?

I really miss those loud ucl night at the san siro. van basten overhead kick, savicevic performances vs french opponents in semi finals, sheva’s goal vs madrid, 3-0 drubbing vs mu, hell even boateng goal vs arsenal; All those magical moments were always accompanied by loud enthusiastic noises made by faithful fanatic milanisti. It still gives me chills remembering all those nights.
Its high time milanisti support milan all the way to the very top of football world again. Its the least we can do.
Oh well, better times ahead

Off topic
For all those bacca lovers name one striker in the top teams in Europe that bacca is better than,barca-suarez,bayern-lewandowski,Chelsea-costa,inter-icardi,juve-huigain,man u-ibra,Madrid-benzema,city-aguero,psg-cavani
Even in Italy he isn’t even top 5 cos huigain,icardi,dzeko,mertens,milik,belotti and even kalinic(cos he has a better hold up play)are all better
Bacca has no hold up play, no ball control, no dribble, no speed,even last season his finishing was below par
Don’t get me wrong I was very excited wen we signed bacca but it turns out he’s not just for us,he’s for clubs that don’t demand much from their strikers

Please come back and write ur comment again when icardi, milik, mertens and kalinic win europa league back to back. Besides, do milan really have players who’re best in their respective positions?

Please what is boban saying. That he is not convinced of the project. Let him park well and stay clear. My Almighty and beloved Milan is back

well for all i care Bacca, can still perfume well if give the chance, and for boban he cannot believe untill get to see the performance ( like peter in the bible ). forza milan.

Which perfume mate? Personally i like chanel allure homme and ysl’s la nuit de’l homme but i think both arent suited for footballing activities

The MilanViking
Reply to  Milan10

Milan needs to catch Madrid we have been missing for far too long.We need the 8th Ucl Crown soon.

Long awaited!!! Here in Kigali-Rwanda, I can’t believe my eyes! We need to chase Real Madrid for Champions league trophies. That is what Milan is made for and deserves. We do not want anymore to lose to relegating teams at San Siro any more! Juventus needs to give back our seat

Lol. Milan10 you’re from which country?

Im from all conquering indonesia mate, no country for old men. Please watch peter jackson’s king kong to find out where it is on the map. We’re not all king kong here mind u

Whoa, thought you were italian, you did perfect english mate, that’s a rare feat among us Indonesians.

I AM italian stallion where it matters mate haha, kidding.

My english is far from perfect mate, even i notice it but im too lazy to proofread my comments.

Oh well, better times ahead for us milanisti

Will do.. I actually browse this blog quite often, its just most of the time I disagree with the comment section, and i lack the enthusiasm to properly replying some braindead comment xD. But not yours.. Yours are actually good and witty. I’ll see ya around thn mate!

Yes we need to go for our 8 ucl trophy

I just change from Joel David and san siro to san siro Milan. My whtapp number is 07067121413 all Milan fan are my family’s

Gloryland. I am a proud Rossoneri. Now I can dream big.

Please I need one.

I want one :))
Here in Iran, it is really hard to buy an original milan jersey. Milan stores worldwide don’t ship products to Iran. You should have a friend or family abroad to bring you the original jersey or jacket, and I have no-one 🙁

Yes , can you give me one medium size jersey? I live in Mumbai india and I cannot buy myself any clothes because I already spent all my pocket money on my sisters birthday. I am 15 btw and don’t have a job.

I am sorry f & m I cannot buy anything from your milan store because I don’t have a job and the only thing I could buy from my saved pocketmoney is an ac milan underwear and that too from the boys section not the mens. But don’t worry in 5 years when I get a job I will surely buy one overpriced cap of yours for sure.

Moses
Reply to  the bird

Comment:The bird is a joker

whats so funny????? this blog is for AC Milan fans. as long as you love and support milan, you are a fan. you can even support just with your heat. I don’t see anything amusing

I am so happy with all the new signings so far.. but I am really worried about our team chemistry and how the new players would gel would the old ones .. AC MILAN is certainly back for sure .. been ridiculed a lot here in Nigeria most especially from EPL fans who think they know about football .. We still need a play maker and a skillful dribbler (winger) that can go past players and cross efficiently

Don’t worry mate,Montella knows what he will do to Incooperate the new signings into the squad to get the desired results and the long time missed football of our legendary Rossoneri

Pioli: “Satisfied with our performance, Leão is a player who can make us win any game, Brahim Díaz is...

Theo Hernández: “We have to play to win the Scudetto, I went it trying to do my best, Bennacer’s...