Nigel De Jong is officially leaving Milan, who thanked him for his services.

Despite being a fans’ favourite and one of the best players last season, Nigel De Jong didn’t get too many chances this season under Sinisa Mihajlovic and is now ready for a new chapter in his life and career as a MLS move is on the cards.

“AC Milan announces that Nigel De Jong’s contract with the club has been terminated today by mutual consent,” a statement on the Rossoneri’s website reads on Monday.

“AC Milan would like to thank the Dutchman for his determination, commitment and professionalism shown during his time with the red and black colours. We wish him all the success possible and all the very best for the next stage of his career.” De Jong is going to join Los Angeles Galaxy in the next days.

The 31-year-old, who had just signed a contract extension in June for three additional years (€3m per season net reportedly), sent a message to Milan through his Twitter account:

“The moment has come to move on to the next chapter in my career. But first I want to take this time to say a couple of words. I’d like to thank AC Milan for giving me the opportunity of playing for this jersey the last couple of years. I would like to thank my teammates, coaches, staff and people working in and around Milanello for always making me feel I was part of their family.

“And of course the fans that supported me from day one, in good and bad times. [I] always respected and honored the logo on that red and black jersey and tried to defend it with a 100% commitment.

“I want to wish everybody with a red and black heart all the best in the future and hope Milan will rise again! Regards, Nigel De Jong.”

De Jong joined Milan 3.5 years ago and played 95 matches with the Diavolo shirt, scoring 9 goals including the winner in the derby in the 2013-14 season (2:12 in the video). Good luck, Nigel! 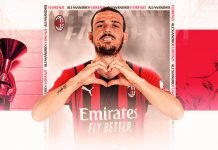 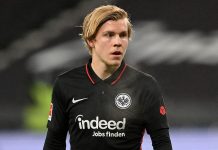 Official: Hauge joins Eintracht on a permanent basis after his loan spell turned into an obligation to buy

I’m so sad with your departure Nigel. you had great career and i wish you could have lifted a trophy with us. Wish you the very best!

What happened to DeJong? Why didn’t Mihajlovic play him? He was Milan’s best player last year.

This was what happened after we defeated sampdoria 4-1. Everybody was saying we’ll have 12 points from the next four matches and what happened? Drew carpi, drew Verona, lost to Bologna. Complacency and consistency is Milan’s problem. My assessment of the match. Donnaruma: Solid as usual, not afraid of any striker, made good saves from icardi. But he likes playing with the ball when he receives a back pass which is dangerous. Abate: He has been good this few matches. Did well in neutralizing llajic. Alex: Did well with the goal but later became a bit careless. Shouldn’t have brought… Read more »

Agree with everything but as much as Balotelli didnt do nothing and just walked, he was not that much responsible for the yellow card, if he earned that yellow card than inter deserved at least 5 more…

Nigel de Jong was a good player and brave warrior on the pitch for Milan! We wish you all the best! Good luck comandante!

great business by galliani he dit not sell him to United in the sommer for 12.5M
he did not accept Lincisters offer of 3M plus 1M bonuses,
he goes and terminates his contract !!!!
so tired of those stupid decisions by galliani, when will he learn how to make good deals and decisions…

He didn’t sell him to Man United cause he was still in Milan’s plans and one of the best players we had before summer.

Agree, thats why coaches should pick players and management should buy who coach need…

i think our Objective shud be qualifying for Champions league and not Europa since we are just 6 Points behind 3rd Place.
our current team can achieve this

Maybe, maybe not, it sure looks easy after win 3:0 against Inter, but did you think the same after the loss against Bologna?

I hope we finish third, especially cause we are already 99% in the europe league…

@Ted – about Balic and Coric

Balic is talented but Coric is way better… But both of them are just talents and they need more time in small clubs, Coric is not ready for Milan, he is not even 100% ready for Dinamo in europe…

I mean.. They could be great once but now, they are not ready…

I will miss the real Caps on this team..
many thanks for your contribute NDJ 34 (C)

Great player in Nigel De Jong, great leader with good professionalism. This guy was one of our best players last season and he was a leader on the pitch with or without the armband I just hope Montolivo learnt something from him. Now we just have to promote Locatelli or play Mauri and get rid of Poli and Nocerino

Thankyou for the services Dejong.