Rossoneri Blog – AC Milan News
Home News Mexes and Pazzini expected to leave at the end of the season,...

Michael Essien is sure to leave while Ignazio Abate is sure to stay but there are 5 other players with expiring contracts waiting to learn their fate.

Adriano Galliani said that they will decide on the contract renewals at the end of the season and that some decisions will be based on whether Milan make it to the Europa League next season.

According to today’s il Corriere dello Sport, the deals of Giampaolo Pazzini (yearly salary of €2.5m net) and Philippe Mexes (€4m net) are not expected to be renewed. Mexes has expressed desire to stay and said he is ‘talking to the club’ but the Rome-based paper doesn’t believe that the Frenchman, who will start in Sunday’s derby, has Milan in his future.

There are good news however, for the millions (and millions) of Daniele Bonera fans as the defender is expected to get a new contract. Bonera, as highlighted by CdS, is ready to cut his salary (currently €1.2m net). Christian Abbiati (€1m net), as reported by Gazzetta.it, is also likely to sign a new deal.

Abate (€1.8m) is almost guaranteed to stay and Essien (€2.5m) will leave. Nigel De Jong (€3.5m) is the only one, it seems, that his future has yet to be decided. Of course things may still change. 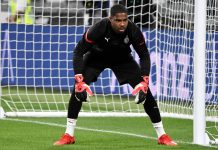 Only if NDJ was Italian…

most people might think that milan is not ready to renew dejong’s contract but I feel the otherway round. doesn’t look to me like a money issue. . more like the player’s not sure (i would say not impress) with the clubs plans and therefore no amount of wage could tempt him to extend. still not faulting dejong.. I wouldn’t rely on gallianis plans either.

Hahahahahahah Galliani is a joke totally

Bonera staying makes me laugh. I don’t think were gonna get rid of him for another 5 years+ and I don’t understand why Abbiati just doesn’t retire so Gabriel can come back.

Abbiati? I dont even care… Bonera???? What is life?

Guys come on. Bonera is the real deal. It’s not like he is pirlo or something to get rid of.

this a joke right?

Galliani and Bonera are both on some deal i believe. My prayer is that a new owner comes and get rid of Galliani.

Finally some good news, Hey guys am one of the millions (and millions) of fans of Bonera…So happy to see him renew with Milan

what’s our project forward once again?

Definitely bonera and galliani have a love affair… IMO, montolivo should be sold.

“Millions and Millions….” I didn’t know the Dwayne The Rock Johnson wrote a column for Rossoneriblog. Must be a late Aprils fools day joke.