THE GLORIOUS start to the Serie A campaign for Milan has seen them cool off considerably, following a loss to Juventus over the weekend and failing to earn a win away from home against bottom dwellers Empoli, settling for a 2-2 draw.

The opening few minutes of the game saw Milan take control as Empoli struggled to get any possession but that would soon change in the 13th minute. What seems to be Milan’s Achilles heel for the last few year’s remains the same. Set pieces. This time an unmarked Lorenzo Tonelli finds the corner kick and heads home from 6 yards out. Absolutely woeful defending by Milan.

The next minutes would see Milan on their back foot as Empoli began settling into the game more. Empoli began driving in a few shots at keeper Christian Abbiati’s goal. The 21st minute would prove to be a dagger to Milan. Again from a set piece, this time a free kick, who else other than dreadful defender Daniele Bonera would be the guilty party. Caught sleeping on the near post, Manuel Pucciarelli turns around and fires his shot past a diving Abbiati for a 2-0 score line.

Sad news would follow for Milan as Marco van Ginkel, who got the start tonight, was stretched off in the 29th minute with an air cast on his ankle. Giacomo Bonaventura replaced van Ginkel in the lineup and Milan began getting a foothold in the game soon after. It took until the 40th minute for Milan to muster an attack of any effect and finally get the ball on frame.

Three minutes later Milan fans would be rewarded with a dazzling piece of quality from Fernando Torres. The Spaniard made a great move in the box and latched onto fullback Ignazio Abate’s cross to head the ball into the far post past Empoli’s keeper who could do nothing but stare as it went in. This breathed new life into the Milan team as they began attacking with purpose now.

Out of the break it was a bit back and forth between the two teams. Coach Filippo Inzaghi decided to substitute Sulley Muntari and replace him with Andrea Poli. This substitution brought a bit more stability to the defensive midfield and Poli also offered some attacking play as well.

The 57th minute was a glorious one for Milan as Keisuke Honda finished off a lovely piece of football by burying the ball in the back of the net to bring the guests back to square one. Four minutes later Frenchman Jeremy Menez had the chance to put Milan ahead after wonderful work from Torres to create some space. Menez’s side foot effort crashed into the frame of the goal to everyone’s despair.

From there on out Milan were chasing the winning goal that never came. A bit of late drama as Empoli man Mirko Valdifori earned himself two yellow cards in the span of one minute to get sent off. In all fairness to the referee, both tackles were reckless and deserved bookings. Even with the man advantage, Milan were unable to unlock the Empoli defense and the game ended 2-2. Gone was the chance for Milan to climb back into the top of the table for now.

What all Milan faithful are continuing to ask of their team selection is the continued inclusion of defender Bonera. The guy is simply not Milan quality. He lacks pace, he lacks technical ability to play as a center back and most of all he lacks the IQ. Why on earth does coach Inzaghi continue to field Bonera with the likes of Mexes and Rami waiting in the wings? Even Mexes, who is much more aggressive and a bit of a hothead, would be better suited than Bonera. It is painful to see Milan play with a shaky back line as it ultimately affects the entire team when goals are conceded due to the lack of quality from the player’s selected. Thank God that Bonera was not available for selection against Juventus or that would have been a much bigger loss.

A positive note to take from the game is the debut of Torres. He was able to show his quality by scoring that marvelous header and time and again made runs into space and dribbled the opponents successfully. This is a positive sign for Milan who will need to rely on their attack to score goals since at the moment their defense cannot be relied upon. 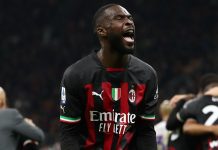 Tomori: “It was important to win after the draw in Cremona, Napoli? We never give up, the league is still long” 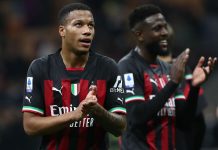 Vranckx: “I am very happy for the team, I have been training a lot and learning a lot, I just have to keep going” 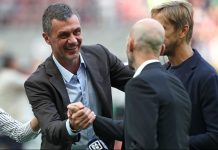 Maldini: “A draw for us would have been like half a defeat, we are more or less where we were last season, we have...

Bonera caused seedorf to be sacked now he’s causing inzaghi to loose. Probably inzaghi is scared of benching him so that he’ll not rebel against him too as he did against seedorf cos everybody knows that rami is far better than both d bonera nd zapata.

“the continued favouring of players that do not perform cannot take the club back to where they belong.” Careful, Seedorf got fired for saying the same thing.

since we didn’t lose den. expect more of boneras in the next expected formation. the Lord is always available always strong and fit.. he doesn’t get injury or where did u read a report claiming bonera is injured.. he’s a God sent to Milan and let ask D God to take him away 🙂

I have no more words about this stupid Bonera.

With this bonera in every line-ups,,inzaghi will be sacked,there must be something behind bonera being on the lineups..Bonera is s***!!!am even better than him playing in CB..inzaghi should be warned ooo!!

Simply, don´t play Bonera anymore. He alone caused 5 goals against us this season (and he played just 3 matches!). I don´t know what Inzaghi sees in him, i mean, they said that they analyze every game via video recordings. Is it in any way possible not to see Bonera´s mistakes? They are blatant throughout the whole game. Especially after the solid performance of Zapata and Rami against Juventus, i didn´t expect that Inzaghi would change that, but still… Same goes actually for Muntari. His good phase is over, it´s time to give him his rightful place on the bench.… Read more »

This is a good formation, but you have to understand that if honda starts in the midfield poli should start either instead of bonaventura. And I don’t know why we don’t buy taarabt #WeMissSeedorf

Why do we ALWAYS HAVE TO MOAN BONERA whenever he steps on the pitch! He can’t be that impressive, NO! He can’t be the unlucky kid who always suffers to the mistakes of other. Is he the vice-captain? It’s an old custom for Milan to always respect seniority of the team members. However, if the strategy is to rebuild the squad with young talent, the senior members should only be left to play a guiding role. Abbiati does it without a fuss. Bonera should follow the example. Otherwise we shall always talk of building Milan, make no progress in terms… Read more »

Even if I support Inzaghi, all the blame on yesterday’s defeat is on him. It’s unacceptable to field your worst defender especially when you bench your best defender and you have better options at all. Second mistake is to make Muntari a starting player. He has no creativity no vision and he is too reckless. It was also a coaching fault to change torres with pazzini who couldnt give anything more in our game, instead he should sub probably Menez with one of SES or Niang to refresh the flanks. Pippo wake up! Dont be another Alegri

inzaghi:“It’s a real shame, as we would’ve won if it weren’t for those free kicks. I think it’s also an individual issue, as we need to be more determined on the marking.”
Right, that individual issue is bonera !!

Inzaghi Obviously is too scared to manage this Team, I think he has to be ready to make Harsh decisions,nomore favouring old folks or even listening to Berlusconi or Galliani again

Funny how this article doesn’t mention how bad muntari actually is. May I ask what exactly this guy adds to the team? He has no technical ability, no vision, can’t make a simple pass, shoots at goal for no particular reason, no pace, can’t defend and is prone to getting yello cards. He only runs and runs, that is all! Need I say more!

Believe it or not pazzini was the the correct sub to bring on as a presence in the box. BUT taking off Torres was the mistake. Having both Torres and pazzini in the box would have been overwhelming for them. We already had menez and bonaventura to dribble by players and deliver passes. We should have sacrificed honda for pazzini instead of Torres, SES is not the type of sub to bring on that late in the game when the other team is parking the bus. He’s better when the game is more stretched and he has room to beat… Read more »

just wen i thought things were beginning to look good