MILAN HEADED into this match with some key players missing but if that’s what the rest of the guys have to offer (even in this stage of the pre-season), coach Filippo Inzaghi has a lot to worry about for next year. Olympiakos were the better team at the BMO Field all along and in the 16′ minute they got the lead with a good attack finished by Alejandro Domínguez. Milan tried to get an equalizer and came close several times but it didn’t work. In the 49′ minute, Dimitris Diamantakos found himself quite free in the Milan box and made it 2-0. Youngster Andreas Bouchalakis put the game to bed with a wonder-strike from outside the box in the 78′ minute. Milan looked confused, unprepared and were just generally poor during the 92 minutes that were played. Their next game is against England champions Man City. 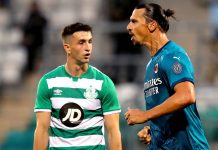 The first time in almost 8 years that is see the teams market value is under 200 m € This is so disgusting.teams like roma and fiorentina and napoli are ahead of us.what is this management doing? I know casa milan was not cheap.and i think the most money of sales went in that building but that should not explain why the team is the weakest since the 80’s. Dont tell me the italian economy blabla.you see roma.you see napoli.they have a lower income and turnover than milan but they buy the big players.i wouldnt mind if milan is buying… Read more »

Let us take a moment of silence for our poor brothers zaccardo and bonera. May they rest in peace in Canada and NEVER come back.

Yeah,pipo must realize quickly, that the likes of mexes,bonera,honda,niang,zarcado,are not the type of players that will make him keep his job,panzzini isn’t so special, galliani must sign Taarabt ASAP

Bonera and zaccardo simply cannot play with this jersey..niang is a sprinter not a footballer

I hate to see bonera as a cb he is a right back. they wanted seedof to leave so that they can misbehave like this under inzaghi

You are not yourself when you don’t buy players. Take a Cerci. But seriously, do we really expect to win against Juve, roma, fiorentina, Napoli, inter and Lazio with this team. I know we didn’t play with our primary lineup but we weren’t playing against real madrid either. We should have the quality and depth to beat a team of olympiakos caliber with our reserves. In 2007, our primary formation was comparable to real madrid, barca bayern and man utd and our reserves were comparable to the primary lineup of europa league-competing teams in Italy. Now, our primary team is… Read more »

milan is dead..overhaul most of the players..especially the defenders…& u will perform

Disappointing performance from Milan.I feel bad for Inzaghi, this poor showing will be of great worry to him.

Me,on the other hand as a fan won’t slip into a panic state just yet.It was a friendly match where we fielded our grade B team plus rusty players and out of shape players were tested.

But i hope this serves as a reminder to Berlusconi that we need to reinforce the team with some few good players.

Niang is 19, and it he works on his decision making in the final third and his finishing he will be great. And Bonera and zaccardo are too slow and uncoordinated to handle the pace of any quick somewhat skillful player. In summary we gave away way too much possession when in the attacking third and our defense was sloppy mainly i believe because zaccardo is not a RB and bonera

I’m going to see them play man city in few days, I hope they can at least keep the game tight and concede little. I think inzaghi should consider a 4-4-2 while were still working on getting a RW

I’m kind of glad we lost. And hopefully we will lose all the other friendlies too. Maybe that would finally put some sense into G&B head. It’s a disgrace for Milan to let some players wearing that shirt. There will always be some bad buys, but Galliani had them way too many in the last few years. The only thing that annoys me more than buying shitty players is inability to get rid of them. I wonder if Zaccardo would really refuse to leave if he was told that they don’t see him as a part of the project and… Read more »

And They fired Seedorf…LOL he new what he was saying when he said he didn’t want 2/3 of this squad.

Reality check: You only get what you offer because the players can only give what they have.Good players give good results while average/poor players give average/poor performance. Success is a result and combination of investement, talent and planning.

Very soon Seedorf will be vindicated

welcome serie b. Sack seedorf because he’s too arrogant complaint the squad quality? Lol.. the squad completely disaster. We only have quality such as genoa, cagliari and even can’t compete with lazio. What a shame.. At least seedorf bring us in 4th place at the end of season with completely disaster teams. It’s unfair to blame all thing to him. Let see what inzaghi can do until mid season.

In a pre-season match teams like Madrid could use a couple of there reserves and subs and manage to win. Why? Because every single player who plays for Madrid knows VERY WELL that whoever flops is out of the project (and of course have the qualities to shine) In the other hand, if you flop at Milan, you are giving the captains armband. I’ve never been a big fan of modern football in terms of big spending ( €80,90 million for players) but it doesn’t mean we can’t make smart purchases. For instance, look at the squad Roma will be… Read more »

This aint Milan this is a handfull of mediocres. Its just a matter of time until milan management sack pippo

Zaccardo must go elsewhere…
Bonera must retire and Constant should go too…
Pazzini is not a football player..he s a theatre player…
He must go away too!