Rossoneri Blog – AC Milan News
Home News Interviews Balotelli: “The eyes of the world are on me, I’m happy here”

MARIO BALOTELLI says he can’t do things people his age do and both he and Abate refuse to talk about the market.

The January market is getting closer each day and there are voices suggesting that the places Mario Balotelli and Ignazio Abate, who are both represented by Mino Raiola, are not certain and they could leave either in January or next summer.

Balotelli’s first months with Milan after the move from City were a big success as he helped them finish in the top 3 but like the rest of the team, he’s struggled so far to impress; however, the controversial striker believes the goals will arrive.

“This is an important evening for Milan and for the Milan Foundation and we are really happy to be here,” Balotelli said yesterday. “I, like the rest of the players, am a good person but a stand out. I don’t live this situation as a normal person, because in the world of football you can’t commit mistakes and can’t do the things that other people my age do.

“The eyes of the world are on me. I’m not the same person I was a few years ago. It’s been a few games since I’ve scored, but in some of those matches I’ve played better than the matches in which I scored. The goals will come back. Going away from Milan? I’ve always said that I don’t think about the future. I’m thinking about now and Genoa and not the transfer market. I’m here at Milan and I’m happy to play here.” Balotelli, 23-years-old, has scored five goals this season thus far.

Abate also spoke the charity gala: “Kaka is vital to us. Let’s hope that he will give an important contribution from now until the end of the season,” he said. “My goal for Italy at the San Siro was satisfying, but that’s now in the past. Saturday we play Genoa and then we have another tough test on Tuesday against Celtic. We need to arrive at these matches prepared.

“There is no difference between the Balotelli in the national side and the one here at Milan. Balotelli did really well against Nigeria on Monday. Let’s hope that he will also be decisive with the Milan jersey. My focus is Saturday and Genoa. It doesn’t seem to me to be the right moment to talk about transfers and I’m not interested. We want to climb up the table as soon as possible. When you play with the national side you motivate yourself in the same way. The same applies for Milan.

“At this moment in time we can’t think about our position in the league, but instead take it one game at a time, trying to achieve a string of good results.” Both Abate and Mario are expected to be on the starting team against Genoa on Saturday. 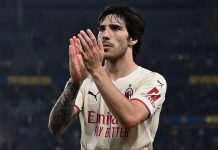 I hope that abate will stay!!!

ok you believe that santon is better than abate??????

I’m with you Juninho. If he runs up the wing like a headless chicken, can’t cross and can’t defend what’s he good for? I don’t mind keeping him though as long he stays on the bench.

@juninho and @dejan10,abate is very much compatible to milan system,the only thing can be done if everyone want abate with juve then we should buy player like coentrao or someone very good and then field de scig on the right full back position….but i dont think that will be too good…

Abate should definitely renew his contract, and probably Mexes as well.
Balo combined very well with Rossi alongside him, and I don’t see why he wouldn’t combine well with El Shaa who shares pretty similar charachteristics as Rossi. In Italy Diamanti played behind the front two, we have Ricky. Now imagine Kaka playing behind Balo and El Shaa, you guys can say whatever you want, that Allegri doesn’t play champagne football, but with these three combining with each other, no matter who the coach is – it will be a spectacle.
Or maybe I’m just a dreamer… 🙂
Forza Milan!

With the form Honda is in right now, he should be able to lift us up one or two level just by himself from January on.

Hell even Robinho was real solid in those two international friendlies. One goal and two assists, not bad at all.

now self matri goin an get loan in jan

The eyes of the world are on me…is this some kind of joke??????
Abate in my opinion should stay….
SIlvestre,zaccardo,muntari,urby,(robinho),balotelli,zapata,matri should leave…
We need bad reinforcements in defence (3-4)
Give more playing time to Saponara,Pacifico,Cristante,Gabriel,Niang
Bring 1 decent CF to help EL92,and – or bring Petagna back

what u smoking on bro

exclude balotelli,muntari,zapata…..and i am voicing same like you…when we r getting no goals with matri,then we should better use petagna,it will atleast give him playing tym + will make him experienced…

who else thought that abate and birsa looked exactly the same in the picture?

But I’ve been following for a while now Dede from Cruzeiro… Beast defender… Could grow a lot in Milan I believe.

Mangala/Indi/Doria/Zouma/Balanta/Umtiti/Del Fabro are the CBs Milan should target.

Now Milan are reportedly(CDS) willing to sell Balotelli to chelsea for only 30m. BS… wont happen!! Except if the offer was 30m+Lukaku! Don’t sell Balo!!

We all know that Matri will be the one to replace Balo if he is sold. Galiani and Allegri has single handedly destroyed Milan.

For 30€ Balo can definitely leave if you aske me
with that money you can buy Lewandowski or Giezmann
Lukaku isnt better that Balo, or get Neilton of Santos and Pato Back

As of Tribalfootball.com: The agent of AC Milan striker Stephan El Shaarawy has revealed they’re keen to hear from Galatasaray. Gala’s Italian manager Roberto Mancini is chasing the young forward for the winter market. Speaking to Radyospor, Roberto La Florio said: “Galatasaray are a big club, they play in the Champions League and are very ambitious. “If Galatasaray are interested then obviously we would consider any offers made. “It’s an honour for a manager like Mancini to be interested in El Shaarawy. “If our terms are met we would be open to talks. “However, for the time being El Shaarway… Read more »

His agent denied all that talk and said SES is happy at Milan and doesnt want to leave.

The power tussle in the management is even more problem than what we have on the pitch, so many names are linked with Milan for the top management posts.

Milan have won a lot with this current structure and a change is imminent now, football has moved to the next level while Milan still live on past glory. Barbara is right and hopefully she gets the restructuring right.

Santon IS better than Abate,all aBOT does is run for a second or two as a headless chicken and pass back. 30 mil. for a living problem like Baloteli are great.

Mexes has quit the french national side, that’s why.
He said he only wants to focus on Milan, and let the younger ones get a chance to prove themselves for the national side 🙂

Balo out .. He is very good player but we need player who wants to play as much as possible ..and Balo would raher play once in week ..and when he is tired he making up troubles that he gets banned for some matches ..sure when we need him alot .. That kind of player can tolerate only very rich clubs that have another 3 quality strikers like him. I would change him for Cavani,Benzema or Falcao if it was possible .. even Lukaku or Chicarito would be great of course they would have to pay us something back.

You know if balo start scoring nun stop goals,YOU SAME PEOPLE WHO SAYING BALO OUT GONNA BE RUNNING UP IN HERE SAYING AM GLAD WE NEVER LET YOU GO BALO,BALO,BALO OUR HERO ETC…ONE SET OF UNGRATEFUL FANS ON THIS BLOG..WHY YOU ALL WASN’T SAYING THAT LAST SEASON WHEN HE CAME IN TO LIFT US UP TO 3RD PLACE…I AM KING MILAN (I SUPPORT MY AC MILAN PLAYERS IN THE TIMES OF GOOD AND BAD UNLIKE MOST OF YOU WANNA BE FANS)

@arber Do u know wat u are talking about??? Do u think Balo is better dan Lukaku??? I dont think so, Balo has everytin it takes to be better but his mafia antics wouldnt let him be free on d pitch. Look d way Lukaku takes every game as if he has a lot to prove, and dats wat i expect from Balo… Watch in matches were Balo wants to prove a point(against Nigeria and in the CL) u see him playing like a monster, and dats wat Lukaku does all d time. I would trade Balo for Lukaku any… Read more »

Juninho
Reply to  Ben max-waiting for seedorf in june

I hope Balo gets to next level.

I LOVE WHAT BOBAN SAID ABOUT BALOTELLI – we miss players like Boban in current Milan squat. “He doesn’t understand what wearing that shirt means.” “Let’s stop always talking about this Balotelli,” he told Sky Sport Italia. “In his life all he has done is sit on the bench at other clubs. “He will always be smaller than Milan and Milan will always be bigger than him. “In my Milan side he would have carried bags for players such as Marco Van Basten, George Weah and Andriy Shevchenko.” “He would have been slapped by people like Paolo Maldini, Marcel Desailly,… Read more »