ANDREA PETAGNA has joined on loan to Sampdoria, who have an option to buy 50% of his card next season.

With Alessandro Matri and Kaka joining the squad in the last week it was inevitable that one of the strikers will have to leave and the one is the 18-year-old Andrea Petagna who is set to start a new experience as a player of U.C. Sampdoria.

Petagna was very impressive in the pre-season and even finished as Milan’s top scorer in it (if you count the games that were played at Milanello as well) and he will hope to get the needed playing time in Genova where the attack is less dense.

“I spoke with Nocerino and Pazzini, and they advised me to choose Sampdoria,” Petagna said. “They told me good things about Delio Rossi, and I’m really happy to be at Sampdoria. My objective is to get as much playing time as possible at Sampdoria.” Petagna goes on loan but Samp have the option to buy 50% of his ownership for €3 million next summer.

Meanwhile it’s reported that Milan could make a transfer deadline day move for Davide Astori of Cagliari. It was also suggested earlier that Milan could swap Cristian Zaccardo for Paolo Cannavaro but the rumour now is Nocerino for Cana. 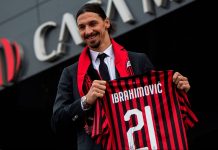 2020 January mercato comes to an end 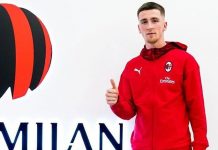 Official: Saelemaekers joins Milan from Anderlecht on loan with option to buy

Good Luck, you will get your chance after Matri hopefully leaves next year.

Is Traore still a Milan player? Can’t we be generous and offer him to some team, anywhere for free?

Good one for the young lad..
Kaka left Seedorf on the left side of the mid-field and met Muntari..

I hope that he gets a chance to prove himself. I would love to see him come back to the club. I thought he had an excellent preseason and showed a lot of potential.

I wish we got rid of muntari instead of boateng but I guess in January Honda can play in his position or as a backup to kaka. With Honda in January we will have some decent depth in the midfield. I hope galliani pulls more rabbits out of his hat before the deadline!! (Maybe Honda?!?!?, wishful thinking)

I also wish Boateng stayed, with Muntari being the one who left.

Sadly, that wasn’t the case because of Allegri and his outrageous decisions of putting Boateng as a trequartista in the first place.

No idea why people are disliking your comment. Sad.

Its dissappointing to see petagna leave on loan because I know milan won’t take him back,after like 5yrs when he is very good we’ll now be begging to buy him from some club!

“Davide Astori and Radja Nainggolan will remain with Cagliari,” announced President Massimo Cellino. Rumours had emerged of deadline day negotiations with Milan for defender Astori and Juventus for Nainggolan. However, Cellino made his point by leaving Milan and the transfer market HQ several hours before the deadline. “I have no intention of upsetting our fans,” he told TMW and the official club website. “Astori and Nainggolan will remain with Cagliari.” Milan Vice-President Adriano Galliani also assured there would be no talks for Astori or anyone else after taking Kaka from Real Madrid. “Our market, in terms of arrivals, can be… Read more »

If it’s me. I would have kept Petagna and used the 12 Million on a much better midfielder or defender. Than Matri Petagna is awesome, strong, tall, Quick, Talented and big clubs in europe noticed him. But the funny Allegri didn’t. Good Luck Petagna I hope you score 10 goals or more and come back to us next year.

I’m still really confused. What’s the point of getting all the Milan fans excited by saying that we don’t need a vice Balotelli because confidence has been placed in Petagna. But then, according to reports, Allegri tells Galliani that he demands a striker. We then spend 12million on Matri (who all Milan fans agree is not worth that much), and then send Petagna out on loan?? What’s the point of lying? It seems they just want to tickle the ears of Milan fans. But why? If you’re real intention is to sign Matri? That makes us even more upset because… Read more »

there still several players left to depart (zaccardo,traore and urby)

Galliani will deeply regret it if a solid center back is not signed as a back up. He tried an exchange of Zaccardo with Cannavaro but Napoli rejected it, he then tried with Nocerino and Napoli still rejected it.

Allegri the fool believes his defense is ok but the whole world could see he’s a joker. Time will tell.

For jibola..wowwwww, after all you say to defend alegry (you and kuchini is a number one alegry lover in this blog) and now you say alegry is a joker?.. What a plastic fans!! Shame on you!! FORZA MILAN, FORZA MILAN LOVER

If only Astori would join us now…only then will our mercato have been pretty much complete…
A centre back was what we really needed, but we didn’t get one… it’s a shame :/
There’s still a little bit of time, and I’m still hoping for Astori.

We running out of time Galliani please we need CB.

Traore? He don’t useful for us. I don’t like KPB he value himself too much. He is not zidane. I’m happy for Kaka. I hope TS33 comeback too. Or maybe CB who stronger than Mexes Zapata. And I’ll be really satisfied :). Btw if De Jong injury who replace him?

Transfer window is closed so you all should forget about any signing.

once again i said milan need support not your useless theory about strategy, transfers, etc.. all of you only know 5% about reality management milan… you dont know how to keep all these player fit, how to managed their stamina, how to teach them about the strategy, even how managed their menu to eat… Can you imagine what management milan do to bring milan become one of the best club football in the world, meanwhile some of kids in this forum always complain even with 0% knowledge about football said what strategy and who deserved played in milan.

astori would have been so good 4 us

Very wise words by Andrea Petagna – going to Sampdoria and playing football would do him a lot more good than staying with us and never getting the minutes on the pitch that would enable him grow.
I look forward to seeing an improved Petagna in our shirt very soon. IN BOCCA AL LUPO!!!
Forza Milan per sempre!!!!!!!!!!!

Milan have been down this road before. Paloschi, Aubameyang, Comi, Beretta, Ganz and Oduamadi all were promising forwards hailed to be the next Inzaghi, Weah, Simone, Massaro etc only to be farmed out on loan never to return. Hate to be a pessimist but I don’t see this kid coming back anytime soon. Why can’t we just take a chance on youngsters. Why can’t we have a manager who has the balls to give starts to young players, like Liedholm did for young Maldini and Costacurta.