THE MILAN LEGENDS took on the ones of Indonesia on Saturday in front on around 40,000 people, of which many were Milan fans, at the Gelora Bung Karno Stadium. Serginho found the net first with an amazing goal (16′), proving he’s still faster than most of the (current) Milan players. Bambang Pamungkas – an Inter fan – equalized for Indonesia (35′). But Milan went to half time with a 2-1 lead thanks to a great Andriy Shevchenko goal in the 40+1′. Pamungkas made it level again with a good header in the 58′ minute but Maurizio Ganz gave Milan the lead back (65′). Serginho sealed the deal with his second goal on the day (78′) and his sixth in this very stadium in his Milan Glorie career. 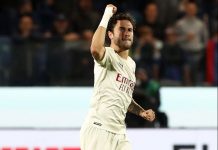 It’s nice to see our legends still have it

Wow the pace on serginho! I see Roque Jr. is still as bad in defending as he was at his peak :p

Lol, massimo taibi … a real legend. I still remember a blunder that he made at Milan. Good thing we sold him after one year.

Am vry excited with the match we tanks God lazio has droped 2 point wining agaist cagliari will 1 piont lead.

Sheva is still great even after retiring! I’m still heart broken over his transfer to Chelsea. Really wish he had retired at Milan!

Serginho is so fit and fast its crazy seeing him play. Both Serginho and Sheva could still play in our current team!

Guys this is the formation tomorrow against Cagliari:

I am still waiting to see the dutch trio play for Milan Glorie. Thanks for coming, Milan. GBU all.

BTW, Serginho’s pace and stamina is beyond my comprehension. He’s 42 years old for crying out loud!!!!

WOW we have too many fans in Indonesia,I wish they could go to sansiro, what an atmosphere! with these fans we beat the sh out of any opponent!

Milan should sign Serginho again, his pace is still that deadly

-I smiled throughout this entire video.
-Bring on Cagliari.
-Forza Milan!!!

No club lyk Milan i’m proud to be a Milanist

Am proud 2 b a milan fans

This is alif (indonesian kids)

@ibro this is not madrid this milan it’s forza milan

Sheva and Serginho have made their typical Goals…. Great!!!