AC Milan face Arsenal F.C on Tuesday when the clock points 19:45 at the Emirates Stadium (20:45 CET) for the 2nd leg of the Champions League eight finals stage and coach Max Allegri has named his squad.

Alessandro Nesta, Rodney Strasser, Alexander Merkel, Gennaro Gattuso, Clarence Seedorf, Mathieu Flamini, Kevin-Prince Boateng, Maxi Lopez, Antonio Cassano and Alexandre Pato are out with injuries, even though some of these players are not even included in the CL squad. Massimo Ambrosini is banned. 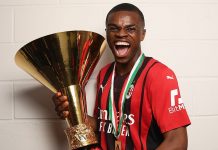 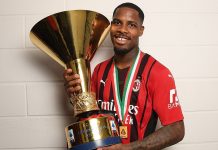 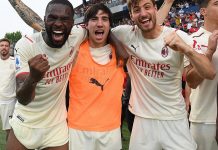 Milan should not push too forward as arsenal wil push upfront in search of goals and it wil be nice to purnish them on the counter.arsenal 0 vs milan 3

I predict the scores should be 3-1.in favour of milan

As it is now, we don’t need too much goals unlike Arsenal, So I guess we just have to be technical and focused. Arsenal will want to attack from start to finish, so we must contain them. Maybe when it has looked like we qualified already, then we can relax and save some strength for Lecce.

dear alegri,
pls be reminded milan are playing in knock-out stage. every goal is decisive. no matter who will play in milan squad, as long as they are fit and have spirit to fight until they die on the pitch, all the fans are fine. i just want to remind you again : be consistent for 90 minutes to not give any free space to arsenal (and other teams) players, especially their midfielders to develop their game. use total pressure football on the midfields! forza milan!

In his press conference, he said he will play 3 strikers and el sharaawy will start in order for him to show his worth. What a nice plan. Go ses

Wenger seems to be about to start with all of Van Persie, Walcott, Oxlade-Chamberlain and Gervinho playing as a CAM. This means that they only have 2 holding midfielders (song and rosicky), and then there’s their weak defense. We’re playing with 3 strikers against such a weak defense…but i expect them to score, too. my prediction is 2-2 or 3-2 in milan’s favor. Of course, if they play like they did in the first leg, then my prediction is 5-0 to Milan.

Wow no Kevin-Prince Boatengor or Alexandre Pato, are huge losses.

The Midfield in thin, I wonder if we’ll see three forwards?

The two team midfield are empty, we just have to contain them, shouldn’t give them space and Victory will be ours.

Galliani should seriously go for Lucas Podolski over Van Persie. Podolski is younger, cheaper, good with both feet and he reminds me of Sheva!

If Cologne gets relegated Podolski will be available for around 5mil! Thats a hell of a bargain for a top striker of his calibre!

Nick… i prefer arjen robben! He is available for 10 mil !! Just imagine zlatan and robben! Wo0o0o0ow!

WOW! Yeah, Robben would be great but I’m concerned about his fitness though as he seems to have some issues there.

Podolski is reliable throughout the entire season even during his time at Bayern Munich!

Yeah robben has fitness problem but 10 mil for him would be amazing! If pato leaves us then lucas is better than rv.persi !

ibra has been awful!