ANDREA PIRLO says he is happy that Milan have won the Super Cup.

AC Milan have won the Supercoppa Italiana last Saturday after beating Inter 2-1 in Beijing, but yet, it was weird to see il Capitano Massimo Ambrosini lifting the trophy, without having Andrea Pirlo on his side.

The 32-year-old Italian midfielder spent 10 beautiful years with Milan, but he moved to Juventus this summer after his contract with the Rossoneri expired, but is still feeling the pride of being a Milanista.

Cassano: “I am not finished!”
Allegri: “No need for vice-Ibra”

“I am very happy for my [former] teammates, they deserved to take the trophy home,” Pirlo told Milannews.it after Italy’s game against Spain; the Azzurri defeated the World Champions 2-1 in Bari.

Milan are looking for a Pirlo replacement, with two of Italy’s scorers from last night, Fiorentina’s Riccardo Montolivo and Alberto Aquilani of Liverpool seem to be possible signings for the Italian champions.

Editor note: Meytar Zeevi is going on vacation starting from Sunday [14/8] until Thursday [18/8] so he will not be updating the site or his Twitter account. 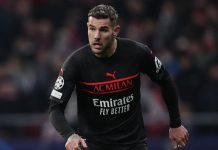 i love the fact he said “home”
miss ya pirlo 🙁

Alcantra will leave Barcelona for sure he and Fabregas can’t play both in starting eleven and l heard that his father said if he don’t get enough space to play he’ll seek for an0ther club.

i want him at ac milan too he is too good

I said that far away before he signed a new contract with Barca…but no one responsed..now no way he can out from Barca..his buy out clouse near 90M

pirlo will sure be missed in San Siro and at least he is saying great things about milan not like other players who,after they leave the club,start to criticize and disrespect the coaches or the president.pirlo didnt betray us he just chose the better option:leave milan to make place for the youngsters.ALL HAIL PIRLO

ithink alcantara will not join milan.At least not this year cz his price is extavagent!!

We definitely can’t find another A.Pirlo again but i hope we’ll get a beta player….
I’ve been missing him since january…wish u all d best at Juve

biggest mistake letting him go and keep someone like van bommel.

i want schweinsteiger and thiago alcantara or gaga here ac milan but if we get montolivo i would still be satisfied but if we get aquilani i would be very worried because he is not stable he does make mistakes and cant have that anymore but montolivo is very stable like pirlo and he is relaxed which is very good. thiago is just class and he is really not that much away from fabregas i think he is a lot better and btw he is brazilian he plays more like a brazilian than a Spanish player oh and 1 more… Read more »

his whole family is brazilian btw

i wish pirlo stayed at milan as his presence and talent was such a benifit to milan. i hope he returns to the club as a ddirector or for a midfield coaching role

i must admit, pirlo was excellent yesterday.

he ran the show..

we must get aquilani no monty

Aquilani? for wat? Montolivo’s definitely the better option…..but getting would would be great as well

italys best player over the last 10 years. The only reason why italy won the world cup in 2006. il maestro sad to see him in a juve shirt

u cant say thats the only reason…..ur being disrespectful to Fabio Cannavaro,Gattuso,Luca Toni Totti and others………

I think Balotelli and Alcantra would cooperate excellante:D as Balotelli said for him that he is the best.

l don’t know why do you want Ganso so much they ask for him more than 25 milions l think we can get Thiago for that sum it would pay us big time he is real magician and plus M0ntolivo on the left we would have something like we had couple years ago Pirlo-Seedorf-Kaka.Instead Gattuso Boateng .Boateng is largely improved version of Gattuso.There is El Shaawary who can jump in the team too.Balotelli,Aquilani,Montolivo and Alcantra would make us strong again cause if you see situation now 2 players wouldn’t be enough.